View source
watch 02:34
Fire Emblem Warriors: Three Hopes - The Loop
Do you like this video?
Play Sound
The events of this mission have been officially confirmed to be non-canon to the storyline, and the events featured do not relate to the series and therefore didn't happen.
For the canonical ending of Grand Theft Auto V, see The Third Way (Option C).

In-game time
“Michael! I thought I was with one Judas! I'm surrounded by them! You fake motherfuckers! You wanna piece of me? Fuckin’ come get me! You wanna kill me? Take a fucking shot!”
— Trevor Philips' last words.

Something Sensible is one of the three possible final missions and one of the 2 non-canon endings[1] of Grand Theft Auto V. This mission is triggered if Franklin chooses option A (Kill Trevor).

Steve Haines and Dave Norton previously tasked Franklin with killing Trevor Philips, due to him being a liability, despite having saved both of them. Later, Devin Weston shows up at Franklin's house and tells Franklin to kill Michael De Santa, due to him also being a liability, for Molly's death and his failure to kill his family. Devin gives Franklin three choices, which appear on his phone as follows: Kill Trevor (A), Kill Michael (B), or Deathwish (C).

Choosing choice A commences this mission and has Franklin call Trevor to meet him at the oil field off El Burro Heights. On the way there, Franklin calls Michael, informs him of the situation, and asks if he can help; Michael is hesitant, saying that it "sounds like [Franklin's] thing", but says he will see what he can do.

At El Burro Heights, Trevor laments how Michael had been backstabbing towards him and how he and Franklin are friends, only to see Franklin turn a gun towards him saying that he was the crazy one, not Michael or Franklin, and he would most likely end up getting all three of them killed. Baffled, Trevor remarks on how he has done nothing but be truthful to Franklin; Franklin concedes the point, but does not let down the gun, saying that the truth is not what he is interested in.

Betrayed again, Trevor attempts to escape in his truck, driving around the city and eventually the oil fields, with Franklin chasing him. Michael calls Franklin telling him that he's close, then arrives in a stolen Premier and rams into Trevor's truck, which causes Trevor to crash into a gas tanker, rupturing it and covering Trevor in gas. Subdued, Trevor crawls out the truck and remarks how he thought he was with one "Judas," but he is in fact surrounded by them. With nowhere to go and with gasoline spilling from the tanker and pooling around him, he resigns himself to his fate and Franklin then shoots the gas, setting Trevor ablaze. Trevor is burnt to death by the flames and the entire tank explodes. If Franklin hesitates, Michael will shoot the gas instead.

With Trevor out of their way, Michael and Franklin leave the fields reflecting over how Trevor's violent behavior led to his demise; Franklin sarcastically thanks Michael for the "education," which Michael counters by telling him to survive, and everything else is "bullshit." The two head their separate ways as the credits roll in with a view of the city.

This section/page depicts all cutscenes and dialogues in the mission "Something Sensible" in Grand Theft Auto V. 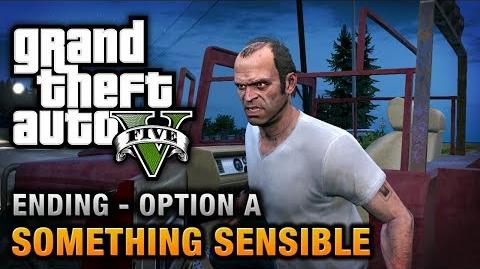 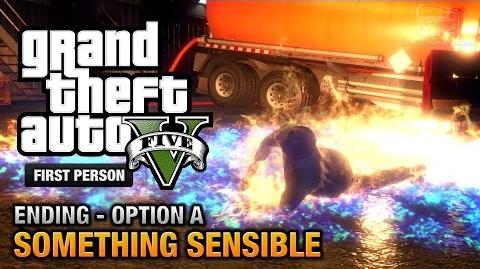 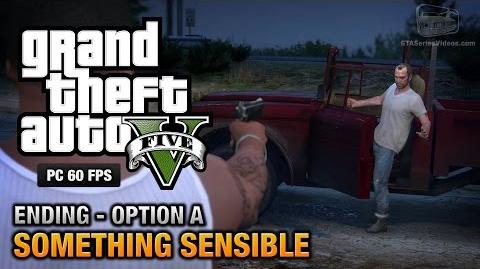