View source
watch 02:34
Fire Emblem Warriors: Three Hopes - The Loop
Do you like this video?
Play Sound
This article is about the character. For the mission, see Mr. Richards.

Joel Rooks
“You know they always say, never work with children or animals. Well, I wanna add to that list. Never work with directors or actors.”
— Solomon Richards to Michael De Santa in Mr. Richards.

Solomon Richards is a successful Vinewood film producer and the owner of Richards Majestic Productions since 1978, a film company he inherited from his father, classic Vinewood producer, David Richards. Solomon began his career as an associate producer on his father's movies, though he later began to produce his own and eventually gained fame during the late 1970s and early 1980s for making commercially successful but artistically mediocre movies, in sharp contrast with his father's critically acclaimed projects.

He had a complicated work relationship with one of his father's lead starlets, Leonora Johnson, because she considered him a hack and refused to complete work on a film Solomon was producing, due to "artistic differences". This great dislike for Leonora eventually made Solomon one of the lead suspects for her murder (which in reality had been committed by Peter Dreyfuss), but he was never charged due to lack of evidence.

By 2013, during the events of Grand Theft Auto V, Solomon's studio has run into financial difficulty after the economic failure of some of his more recent productions. Tired of the movie business, Solomon seeks to recover his studio's prestige and successfully retire after making one final movie: Meltdown.

Solomon is introduced to Michael De Santa by their mutual contact, billionaire holdings investor Devin Weston, who is also a major shareholder in Richards' production company. Michael, a big fan of Solomon's work, agrees to help his idol complete his swan song picture. Solomon tells Michael that his lead actor, Milton McIlroy, and his director, Anton Beaudelaire, have left production after being persuaded to sign up with former gangster Rocco Pelosi's management firm and Rocco is trying to force Richards to pay him off to get his lead and his director back. Per Solomon's request, Michael tracks down and beats up Rocco to get him to back off and then successfully intimidates the two crew members into returning to the set.

Some time later, Rocco and his partner, Gianni, break into Solomon's studio and assault him, trying to force him to pay them off. However, they get caught by Michael, who chases them out of the studio and eventually kills them both.

Solomon manages to complete the film, but he gets betrayed by Weston, who decides to shut down the studio and the production in order to cash in on the insurance and so that he can sell the studio property and develop into luxury condos. Weston gives the analogue copy of the film to his attorney, Molly Schultz, as she leaves the city so that she can dispose of it, but Michael follows her to the airport and attempts to recover the film, scaring Molly (who believes Michael is trying to kill her) and causing her to accidentally get sucked into a jet engine. The film is left untouched and Michael manages to recover it, only to later discover that Solomon shot digital copies just in case, which Michael wasn't aware of.

Following the Molly incident, Solomon and Michael attend the premiere of Meltdown, but Michael misses it to save his family after Weston sent a platoon of his Merryweather soldiers to his home to kill them. Meltdown turns out to have mixed critical reception, but audiences love it and the film becomes the biggest box office hit of Solomon's career.

In August 2020, Solomon suddenly texts the GTA Online Protagonist telling them that his office has been raided and with no faith in the capabilities of the LSPD, urges them to come take a look. Once there, he sends a follow-up message asking the Protagonist to help find his stolen Movie Props and deliver them back to his studio. After all 10 Movies Props have been returned, Solomon sends a final message thanking the protagonist for their help and telling them that he's left them a gift "money can't buy" in his office, and makes no further appearance.

Meltdown premiere at the Oriental Theater in Vinewood Boulevard.

Solomon's star on the Vinewood Walk Of Fame. 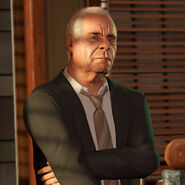