Soldier is the first storyline mission in Grand Theft Auto: Vice City Stories given to protagonist Victor Vance by army sergeant Jerry Martinez from his office at the Fort Baxter Air Base in Vice City.

Victor arrives at the Fort Baxter Air Base by a Barracks OL and meets his new sergeant, Jerry Martinez. Jerry tells him the real opportunity to make money however Victor refuses to go through any trouble. Jerry then tells him to get over to Escobar International Airport and pick up a package for him. Victor, outside, is handed a pager and on a Streetfighter makes it to the airport. When meeting the dealer with the package, however, hitmen are following and attacking them. Victor starts shooting at the hitmen but the Marquis is set on fire. The dealer's hookers both die in the explosion and the dealer drowns as Victor manage to escape and swim to shore while avoiding gunfire from the hitmen. Victor goes back to his barracks inside the base and hides the drugs there.

The reward for completing this mission is $50 and the mission Cleaning House is unlocked. The player can also explore the Mainland area of Vice City, save their game at the Barracks Safehouse and receive pager messages.

Victor Vance about to get on a boat at Escobar International Airport.

Victor Vance talking to Jerry Martinez.
Add a photo to this gallery 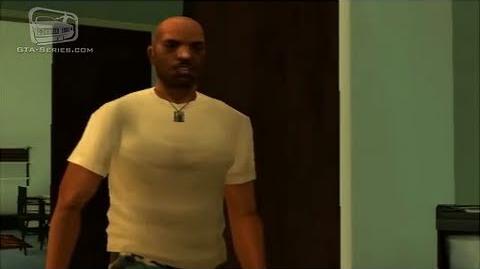 Retrieved from "https://gta.fandom.com/wiki/Soldier?oldid=1216238"
Community content is available under CC-BY-SA unless otherwise noted.