The Soiree Outfit is one of the twelve unlockable outfits in Grand Theft Auto: Vice City. It is also one of the six storyline outfits (ie. outfits that play a part in the game's storyline), and the first unlocked in the game. It consists of a blue suit, black shirt and black loafers. It is unlocked after the mission The Party. In the mission, Tommy Vercetti goes to Rafael's clothes shop, changes into the outfit and attends one of Juan Cortez's parties. After the mission, it spawns outside Rafael's Clothes Shop. Changing into the outfit removes up to a two-star wanted level, even if the player is already wearing the outfit.

The suit from Miami Vice that may have inspired the Soiree outfit. 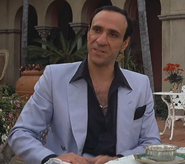 The suit from Scarface that may have inspired the Soiree outfit.
Add a photo to this gallery

Retrieved from "https://gta.fandom.com/wiki/Soiree_Outfit?oldid=1167785"
Community content is available under CC-BY-SA unless otherwise noted.