So Near, Yet Sonar

• ­Board the salvage boat.

• ­Sail to the search area.

• ­The cargo hold's full. Take the cargo back to the jetty.

"The morons I employ as charity to their families have allowed a shipment of my goods to be destroyed in the bay. You must rectify this error, while I attend to other, more vital, matters."
―Zhou Ming

So Near, Yet Sonar is a mission given to protagonist Huang Lee by Zhou Ming in Grand Theft Auto: Chinatown Wars.

Zhou orders Huang to recover the cargo of the boat that Huang (unbeknownst to Zhou) sank for Wade Heston.

Enter in the boat docked in the nearby pier and go to the search area. There, activate the radar by either pressing the icon on the touchscreen or the button, depending of with version of the game is being played. Several green dots will be marked on the map when the radar is used, some of the dots represent the boat's cargo, but most of it represent the ship's wreck and others the sea mines used by the ship. The dots will disappear after a couple of seconds, so keep pressing the radar icon/button to keep then on the map. Once the player approach one of the dots, press the radar icon/button to dredge it up from the sea, through an easy minigame. Be careful, if the player dredge up a sea mine, his boat will inevitably take some damage from the explosion.

There will be some patrol boats in the middle of the search area, if the player approach them or use the radar too much (by pressing the icon/button too many times) they will find and attack the player's boat, so watch out. Once the player have found 4 pieces of cargo, return to the pier and the mission will be complete.

The reward for completing the mission is 15 bags of Acid.

"I can't believe it!

Zhou had me dredge up from the riverbed the same contraband I sent down there when I blew up his boat for Heston.

If he only knew the truth!" 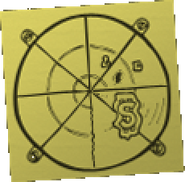 So Near, Yet Sonar
Add a photo to this gallery 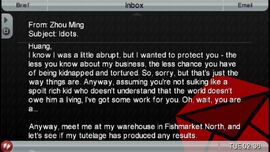 Zhou sends a e-mail to Huang telling him to meet him at his warehouse in Fishmarket South. 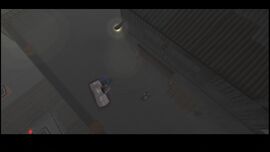 Zhou and Huang arriving at the warehouse. 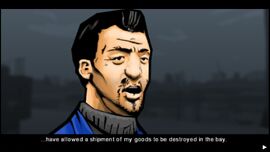 Zhou angry after his shipment was destroyed in the bay. He asks Huang to use the boat's sonar to find his shipment. 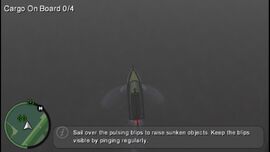 Using the boat's sonar to find the shipment. 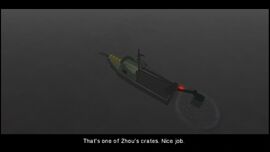 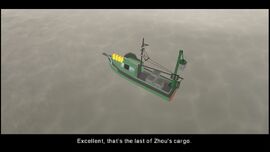 Getting the last crate. 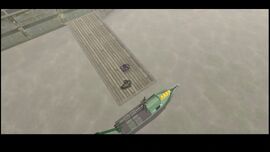 Taking the shipment back to Zhou. 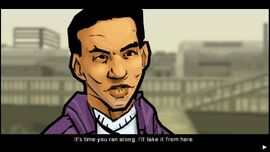 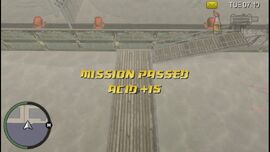 Retrieved from "https://gta.fandom.com/wiki/So_Near,_Yet_Sonar?oldid=1166320"
Community content is available under CC-BY-SA unless otherwise noted.