Wikipedia has an article on:
Sniper Rifles
Wikipedia

A sniper rifle is a precision firearm used to ensure more accurate placement of bullets at longer ranges.

It is a common misconception that any scoped rifle is a sniper rifle, and while certain long guns are more suited for the application than others, it is the act of using a weapon strategically as a sniper that designates it as such. A typical sniper rifle is built for optimal levels of accuracy, fitted with a telescopic sight and chambered for a military centerfire cartridge. Despite this, not all rifles in the series have a scope. Almost all sniper rifles won't allow the player to move while aiming, except the Rifle and Marksman Rifle, this, however, doesn't apply to the enhanced version of Grand Theft Auto V.

Like in many shooter games, the rifle's bullets fly straight to the targeted point (it is a 'hitscan' weapon) - real life variables like distance, wind, or target movement do not affect the bullet, but it does in one mission in GTA V, or when hunting. GTA IV however, did introduce one element of sniping, the shooter's heart rate and breathing affect the aim (this is displayed through the fact that the aiming "piper" will "dance" around in the scope). Holding down a button will slow Niko's heartbeat and stop his breathing for a bit, which steadies the aim.

Following is a list of all available sniper rifles in the Grand Theft Auto Series.

The Sniper Rifle is often referred as Standard Sniper Rifle or Bolt-Action Sniper Rifle to avoid confusion with other Rifles, it is the most prominent sniper rifle in the series and often used in missions.

Through the series, the Sniper Rifle has changed its appearance multiple times, always resenbling a different model:

Just like the Sniper Rifle, the Combat Sniper also changed its appearance through the series:

GTA IV.
Add a photo to this gallery

The Rifle is based on the Marlin Model 336, a lever-action sporting rifle and carbine made by Marlin Firearms. An evolution of the Model 36 rifle, design improvements include a stronger and simpler round-profile chrome-plated breech bolt, a redesigned cartridge carrier, an improved extractor, and coil-type main and trigger springs in place of the flat springs used in earlier Marlin rifles

GTA San Andreas.
Add a photo to this gallery

The Advanced Sniper is based on the DSR-1, a compact bolt-action rifle designed, manufactured and marketed by the German company DSR-Precision GmbH. Is configured in a bullpup design, with a free-floating barrel. The folding bipod is mounted onto upper rails (above the barrel), and the adjustable horizontal front grip is mounted on the lower rails (under the barrel). The rifle features a fully adjustable rear stock and cheek piece.

The Heavy Sniper is based on the Barrett M82, it is a recoil-operated, semi-automatic anti-materiel rifle developed by the American Barrett Firearms Manufacturing company. Designated as a heavy SASR (Special Application Scoped Rifle), it is used by many units and armies around the world.

The Marksman Rifle is based on the M39 EMR/Mk. 14 Mod 1 EBR, a semi-automatic, gas-operated designated marksman rifle chambered for the 7.62×51mm NATO cartridge. It is a modified and accurized version of the M14 rifle used by the United States Military. It is currently issued with match-grade M118LR 175-grain Long Range ammunition

The Remote Sniper is a unique rifle and it only appears in the mission Caida Libre, otherwise it's completely unobtainable. The weapon is a modified Heavy Sniper placed on a gun mount. It has an incredibly long range and power, as it can stop a plane turbine with only three shots. 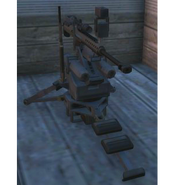 Retrieved from "https://gta.fandom.com/wiki/Sniper_Rifles?oldid=1172959"
Community content is available under CC-BY-SA unless otherwise noted.