The weapon is often referred to as "standard sniper rifle" or "bolt-action sniper rifle" to distinguish them from other rifles in the game.

The sniper rifle only appears in certain missions of Grand Theft Auto: Chinatown Wars, where the player has to assemble the rifle using the touch screen. In the DS version, the whole top screen is then used to display the scoped view. In the iOS version, the top screen display moves into the single screen by showing up beside the rifle assembly. This also applies to the PSP version, although there is no touch screen functionality.

From Grand Theft Auto III to Grand Theft Auto: Liberty City Stories, the Sniper Rifle resembles a Remington Model 700, evidenced by the single wooden body (even though in Grand Theft Auto: San Andreas, the HUD icon depicts a PSG-1 instead). The rifle is only able to use single rounds per reload, opposed to the real-life inspiration, which is equipped with 5 or 10-round magazine

In Grand Theft Auto: Vice City Stories, the weapon is based on the M21 Sniper Weapon System, but it functions incorrectly as a bolt-action rifle, whereas the real M21 is semi-automatic. Despite having a detachable box magazine, it still acts as a single-round weapon.

The Grand Theft Auto IV rendition is still modeled after a Remington Model 700, but features a detachable magazine this time. The scope adopts a basic Mil-Dot reticle and is able to be used when aiming, although when taking cover, it is possible to use the generic reticle. This rendition uses a 5-round magazine.

In the files, the Sniper Rifle is referred as "M40a1", suggesting it is intended to be an M40A1, the USMC version of the Remington 700 that shared its design, but having different traits (i.e. non-detachable magazine).

In Grand Theft Auto V and Grand Theft Auto Online, the sniper rifle is based on the Arctic Warfare, specifically the AW-F (judging by the sectioned stock right behind the grip, a common feature on folding variants of the rifle). The weapon has a top and side Picatinny rails.

With the introduction of the attachments mechanic, the weapon can be fitted with a Suppressor, allowing the weapon to be used for long-ranged sneak attacks. Rather than employing a unique reticle, the Sniper Rifle uses a different reticle, which is standardized by the scope the weapon is equipping.

As expected from a sniper rifle, the weapon deals excellent damage and range over targets, as it is usually deadly and can deal a considerable damage over basic vehicles; it takes around five direct hits to destroy an unarmored vehicle. It is always one-shot kill against both armored and unarmored target at any range and a headshot will usually decapitate the target. While powerful, the Sniper Rifle's bolt-action mechanism means it is rather slow, as the weapon reloads every time it shoots, being ineffective on situations where a rapid-fire weapon is needed. Since the player needs to stand while aiming the weapon, it makes somewhat difficult to take out targets at close ranges.

The Sniper Rifle appears to be statistically similar to the Combat Sniper rifle; it is, however, a bolt-action rifle, and thus it cannot fire nearly as fast. It provides a one-headshot kill in single player and multiplayer, unless the target is heavily armored.

Compared to previous iterations, the Sniper Rifle is more versatile thanks to its 10-round magazine. Its reload speed is almost the same as in GTA IV, since it is still a bolt-action rifle. The Sniper Rifle's zoom is determined by the current scope and, because it can equip a suppressor, is a perfect choice for stealthy kills at long distances.

The Sniper Rifle is not very lethal compared to previous renditions, but is still a powerful weapon. A body shot usually hurts the target severely, to the point of dying by bleeding. Against another player, they will receive a critical damage if being shot to the body, but they can suppress it with Body Armor, as the rifle is not very good against armored targets. It will also take many rounds to take out a single car, making it unsuitable for such purpose. 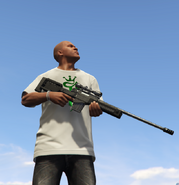 Franklin with a Sniper Rifle.

Sniper Rifle's artwork with Huang Lee from GTA Chinatown Wars. This version is based on the H&K SR9 T.

Another artwork of Huang with a different Sniper Rifle. This version is based on the SR-25.