In every other game besides GTA2, GTA: Vice City and GTA Online, smoking was only depicted during cutscenes or during gameplay, but only used by pedestrians.

In Grand Theft Auto 2, Claude Speed is able to smoke a cigar in regular gameplay if idle. Many idle pedestrians during missions are also seen smoking.

In Grand Theft Auto: Vice City, smoking is not a function normally possible in gameplay, however, a cheat on the PC version allows this to happen.

In Grand Theft Auto V, Michael De Santa is seen smoking during mission cutscenes or in a switch scene. It is also possible to have Michael smoke while sitting on the couch.

In Grand Theft Auto Online, the player starts off with 10 Redwood cigarettes in their inventory. Once there are none left, the player can go to a 24/7 or Limited LTD Service convenience store to buy a pack of 30 for $8. The player can be briefly seen smoking when joining GTA Online (if the player does not own any safehouses) or when back to free roam after completing a heist setup.

Due to the fact that smoking is only available in a cheat in Vice City, there is no effect in-game. Tommy will not even hold the cigarette; it will simply be held in his mouth while producing smoke.

In GTA Online, the default animation for the protagonist is to take two puffs of the cigarette before throwing it on the ground. Holding down the quick action button, however, will allow the player to continuously take puffs until the button is released, upon which the cigarette is discarded. Cigarettes will slowly negate health in the same way normal damage is taken; health drained above 50% will not recover, whereas health below 50% will recover upon stopping. 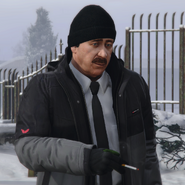 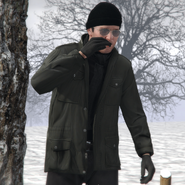 The player smoking in GTA Online. 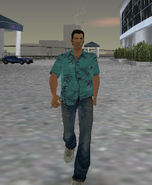 Tommy Vercetti smoking, in GTA Vice City.
Add a photo to this gallery
Retrieved from "https://gta.fandom.com/wiki/Smoking?oldid=1003642"
Community content is available under CC-BY-SA unless otherwise noted.