View source
watch 02:56
Raise a Floppa - The Loop
Do you like this video?
Play Sound
This article is for the mission in GTA IV, for missions in other games, see Smackdown.

In-game time
“Your brother said you needed a hand. Looks like you'll need more than that.”
— Niko Bellic

Smackdown is the first mission that Niko Bellic does for Derrick McReary in Grand Theft Auto IV. To get the mission the player can call Packie after the Three Leaf Clover mission. Derrick is one of the McReary brothers. In this mission Derrick asks Niko to kill one of his war mates, Bucky Sligo.

When Niko meets Derrick at the park in Acter, Alderney, he's severely intoxicated and incoherent. It takes a while for him to explain that he's got a problem. One of his War buddies, Bucky Sligo who was busted into prison by Derrick is now blackmailing him, threatening to kill his family. Derrick decides to end this, so he asks Niko to kill him.

In order to find Bucky's whereabouts the player will need to get access to a police computer, which means to enter a police car. There are a few parked nearby since an LCPD station is right around the block. Once inside a police car, bring up the police computer and search for "Bucky Sligo" (or just "Bucky").

The police computer will list Bucky's hideout, a Burger Shot in northern Alderney, and then proceed to the destination. On route Niko will briefly call Derrick to inform him of this.

Pull up to the Burger Shot location. A cutscene shows Niko blasting the siren and Bucky riding away. Chase the truck through the various alleys until he parks his truck at his hideout. Bucky will abandon his car and head into the hideout, where the five members of his crew are stationed. Killing Bucky and his gang will then result in a two-star wanted level.

Once the player has evaded the police, Derrick will call Niko while intoxicated and say that alive and dead are "both the same thing." Niko tells him he will speak to him when he is among the living. 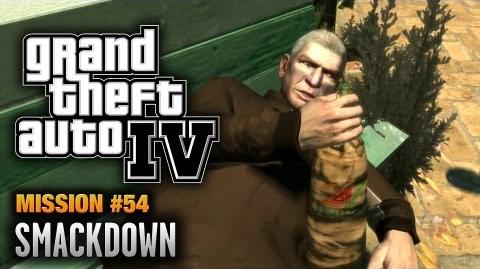