In-game time
“Look man, we gotta send this dude a peace offering or something man. And nothing says "I love you, brother Vernon, and I thank you for your years of wisdom and guidance, but there's a new dog in town" like taking care of a man's legal problems...”
— Lamar Davis

Slow and Low is a mission in Grand Theft Auto Online, and is the second mission given by Lamar Davis to two players in the Lowriders update.

“Get some lowriders across the city to their buyers without getting spotted by the cops.”
— Level Description

Vernon, a Families OG, has a problem with Lamar trying to take over, so Lamar tries to make peace by having the players deliver two lowriders, a Faction and a Voodoo from Del Perro Pier to the East Los Santos Foundry in Cypress Flats for a South Korean buyer that Vernon has lined up. The protagonists appear to be somewhat reluctant, but Lamar assures them that it's just a simple delivery job.

However, the LSPD are actively looking for the lowriders as they have a warrant for Vernon's arrest. Due to this, the players must deliver the lowriders without being spotted by the police. To assist with this, the police appear on the Minimap as they would if the player had a Wanted Level.

Upon arrival at the foundry, the player must let the buyers confirm the deal, but the Ballas, having had their bid for the cars rejected, discovered where the deal was taking place, and disrupt it in an attempt to steal the goods. The players must then kill all the Ballas coming on from the roofs, alleys and roads. Once done, the deal is blown and the buyers who survived the shootout flee the scene. Afterward, Lamar arrives, originally angry at the players for the deal falling through, but then calming down and thanking them for trying (although he still places the blame solely on them), before leaving in his car to go and smoke cannabis. The protagonists are left not particularly impressed with Lamar's handling of the outcome. Upon the end of the cutscene, the mission is completed. 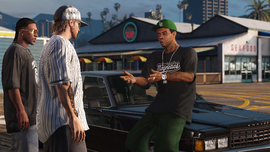 Screenshot of the mission on Rockstar Newswire.

Lamar meets with the players at the pier.

"I love you, brother Vernon, and I thank you for your years of wisdom and guidance, but there's a new dog in town."

Lamar introduces the players to the lowriders they need to deliver.

Getting into the lowriders.

Arriving at the meet.

Meeting with the buyer.

Taking out Ballas on the rooftops.

Taking out Ballas attacking from the foundry.

Lamar arrives at the meet.

Lamar expressing his dismay at the unsucessful deal.

Lamar drives off once more. 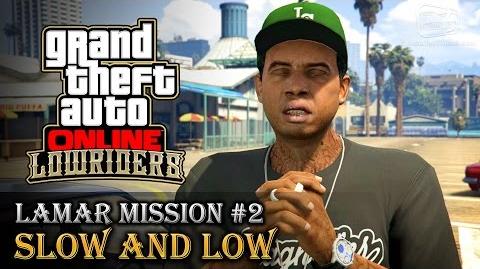