A Hunted hiding from a Slasher in Slasher I.

In-game time
“The Slasher stalks up to 7 Hunted with a shotgun. And they've only got flashlights. After 3 minutes, the Hunted get shotguns to turn the tables on the Slasher. If the Slasher or all the Hunted are killed within the time-limit, the other team wins.”

Slasher is an Adversary Mode featured in Grand Theft Auto Online as part of the Halloween Surprise update, released on October 29, 2015.

“This hyper-sensory game mode requires concentration, marksmanship and a rigid control of your own fear. Where you lack vision, you'll have to use touch, sound and instincts to ensure survival. Those who are yet to play the mode should know that the Slasher begins each round armed with a Shotgun and has three minutes to dispense with the Flashlight-wielding Hunted as they hide in the gloom and darkness. After three minutes, the game turns on its head as the Hunted also receive Shotguns and the Slasher becomes the prey.”

Slasher missions focus on darkness. All missions take place inside buildings, except Slasher III, which takes place on a ship.

There are two teams:

If no victory conditions are met, that is, if the Slasher and at least one Hunted are alive when the second timer ends, both sides fail the mission.

By its nature, this Adversary Mode has a particular way of scoring. All the Hunters win the round no matter who killed the Slasher. That can lead to an odd situation. In a game with Player A, B and C, default options (2 rounds to win), this can happen:

Round 1: Player A is the Slasher and wins.

Round 2: Player A is the Slasher and loses.

Round 3: Player B is the Slasher and loses.

At the end of Round 3, the game will end, as player A and player C have both won two rounds. The ending sequence will, however, claim that the whole Hunted team is the winner, even if there were other players who didn't win the same amount of rounds or who were previously in the opposite team.

When being the Slasher, a good strategy is to be thorough when checking for hideouts. To avoid melee attacks, it is best to keep a distance when going through corridors and narrow areas.

A good strategy for a member of the Hunted is to hide, and when the Slasher walks by, come out and hit the Slasher with the flashlight. This works especially well on Slasher IV as it is pitch black and the Slasher may be forced to use his/her flashlight.

In general, paying close attention to sounds and changes in light levels can reveal the position of the enemy. 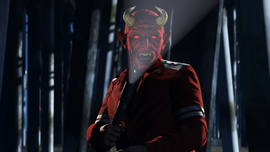 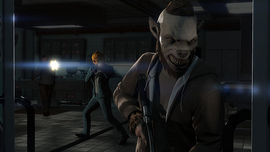