Toni Cipriani using a chainsaw in level one.

Wearing the Overalls Outfit and being inside of the hull of the ship between 18:00 and 5:00

Cox Mascot Outfit (after completing the side mission a second time)

Slash TV takes the same premise as The Portland Chainsaw Masquerade mission, with Toni having to kill people wielding chainsaws, with each level having more people attacking Toni. The first time Toni has to beat the mission, he has to defeat homeless people with chainsaws, whilst the second time the mission is triggered it has people in Cox mascot suits. Each session of the mission has five levels.

Various items can be collected whilst playing Slash TV. Enemies will drop money, as well as chainsaws, Micro SMGs, health, and armor. A randomly selected bonus weapon also appears after completing each level.

The monetary reward for completing Slash TV increases with each level. The first level has a reward of $100, the second $300, the third $500, the fourth $700 and the fifth $1,500. Completing all five waves rewards the player with the necessary percentage for the 100% completion of the game. The Cox Mascot Outfit is also unlocked after completing this side mission twice. 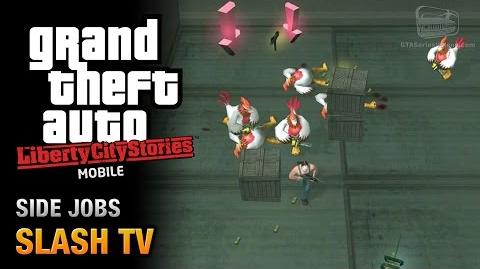