Not to be confused with Lost Slamvan, a variant of the Slamvan also named "Slamvan" pre-GTA Online.
“Favorite 50's pickup of San Andreas Lowriders and Liberty City bikers. Smooth lines, chrome details, and shiny paintwork have made the Vapid Slamvan the toy of choice for idiots who won't grow up everywhere.”
— Southern San Andreas Super Autos description.

The Slamvan resembles a heavily customized second-generation Chevrolet/GMC C/K Series with a chopped roof and custom suspension, while the front of the vehicle is similar to the Dodge Sidewinder (with the exception of the headlights).

The Slamvan is depicted as a custom 2-door pickup truck with dual circular headlights, a small cabin, a black bed cover and rectangular tail lights. Sometimes the Slamvan will spawn with a custom chain steering wheel. The vehicle only spawns in a variety of single colors.

In the beta version, the Slamvan had a different wheel design and paint job not seen in the final version.

The Slamvan resembles a 1953–1956 Ford F-Series Pickup with some cues from the Chevrolet Advance Design. It appears that the top half of the cab is from a 67-72 Ford F-Series.

The Slamvan is depicted as a classic pickup truck sharing the same front design as its van equivalent (reintroduced under a different name), but featuring a truck bed and rear-facing split window. The truck bed looks similar to the Bobcat from Grand Theft Auto IV, but has side border extensions, wooden floor and a tailgate with "VAPID" embossed on it. The rear bumper and tail lights were derived from the Towtruck (another vehicle that shares many similarities in terms of design), albeit cleaner in appearance. The interior uses "Bobcat" textures and dials.

The primary color of the car is applied on the main body, while the secondary color is applied on the hood, upper part of the cabin and the upper borders of the bed. It shares the same wheel design as the Towtruck, being a derivative of the "Classic Rod" wheels also available in Los Santos Customs.

The Slamvan is quite nimble and comfortable to drive due to its supercharged V8 and upgraded suspension. It possesses good acceleration and average top speed. Its brakes are also strong, being capable of quickly stopping from top speed to zero; its downsides however, is the arguably poor durability and stability, and despite its low height, it can still rollover easily.

The Slamvan has a customized V8 with 4 double-barrel carburetors, which sounds similar to the Duke O'Death, The Liberator, and Marshall. In-game stat bars and testing has shown it has the same performance as the Rat-Loader and its clean variant, the Rat-Truck. Thus, it has average acceleration and top speed, matched with very poor brakes and traction.

The Slamvan can only be modified at Loco Low Co. As such, the Slamvan is capable of participating in the Lowrider Challenge.

The Slamvan picture in the Driving School. 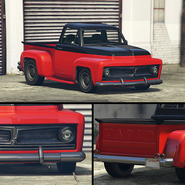 The Slamvan on the updated Rockstar Games Social Club.

The Slamvan in the cinematic preview on GTA V Rockstar Games Social Club.

The Slamvan in the cinematic preview on GTA Online Rockstar Games Social Club.