Standard White - 100%
“Due to a recent spate of accidents involving this model, Vapid wants to remind any potential buyers that a common side effect of driving the Slamtruck is the constant stream of assholes attempting to clear your ramp on the freeway. See one coming? For the love of god, duck.”
— Southern San Andreas Super Autos description.

The Vapid Slamtruck is a car hauler featured in Grand Theft Auto Online as part of the The Cayo Perico Heist update, released on January 21, 2021, during the Slamtruck Week event.

The Slamtruck is a car hauler derivative of the Slamvan, bearing a resemblance to the Suzy Stuchel's custom 1956 Ford COE 600 Hauler.

The Slamtruck shares some of the distinctive features from the Slamvan, being the split grille, circular headlights and cabin. However, it assumes a bulkier profile, where the front end features a flat bumper and a taller hood. The sides of the cab feature curved fenders with side steps for access, while the cabin has a more rounded rear portion, larger rear-view mirrors and wider separations on the side and rear windows. The rear section mainly consist of the rear ramp, having slanted side borders, small compartments and a single exhaust tip on the passenger side. The ramp features two black sections running across it, as well as an unusable tow hook and winch. The rear end features circular tail lights and a license plate. The interior is drastically different to the Slamvan, using the "Peyote" dial set and the "Peyote White" interior textures seen on the Voodoo Custom and the Peyote Custom.

The primary color of the truck is applied on the hood, cabin and the trims/details around the vehicle's lower area, while the secondary color is applied on the lower front and the rear section. Although not accessible, a trim color is also available for the doors and the sun visors, which is always set to black in purchased examples. It uses a set of industrial wheels derived from vehicles like the Benson, the Mule and the Phantom, with the rear ones being dual wheels.

Depending on which grille is installed, the Slamtruck features working secondary fog lights that were not functional on previous Slamvan variants. It also uses a truck horn identical to the one from trucks such as the Benson, the Mule and the Police Prison Bus.

Similarly to the original Slamvan, the Slamtruck’s performance is considerably lackluster, and the additional weight and size only exaggerates the boat-like steering and control compared to its muscle counterpart. The additional weight also gives the Slamtruck some decent ramming capabilities, as it is able to push relatively light and standard vehicles with ease at high speeds. The Slamtruck is equipped with a functional, player-controlled hydraulic system, which operates in the same way that the Faction Custom Donk does.

The vehicle is powered by what seems to be a V-shaped engine set half-way through the cab. Upon closer inspection with the Rockstar Editor camera, is revealed that only the front half of the engine is rendered and lacks any manifold, and while mostly hidden, the timing belt is fully-animated, in a similar manner to vehicles such as the Fränken Stange, the Hustler and the Phantom Wedge (though the pulleys remain static). The same engine is coupled to a 4-speed gearbox in a front-engine, rear-wheel-drive layout, and shares the same sound with the Slamvan and its derivatives. 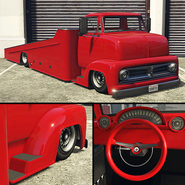 The Slamtruck in the cinematic preview on Rockstar Games Social Club.