GTA Wiki
Register
Don't have an account?
Sign In
Advertisement
in: Pages with unclear information, Vehicles, Vehicles in The Ballad of Gay Tony,
and 11 more
English

Aircrane (by Luis and Trevor)

The Skylift is strongly based on the Sikorsky S-64 Skycrane/Aircrane, but with the cockpit bent down and the landing gears extended.

The Skylift is one of the largest helicopters available in the game, as its general appearance is much longer, taller and wider than any of the traditional helicopters (on par with that of the Leviathan from Grand Theft Auto: San Andreas). The vehicle is unique as it has a large magnet under the rotor that allow it to lift large vehicles. However, this feature is, like the Leviathan, mission-exclusive and not used in normal gameplay.

The helicopter is only available in a blue color with white markings, reading "Liberty Sky-Lift" and "LC2". Its rotor blades have a black-white pattern with the same yellow color at the end of each blade. Its interior is detailed and features a large flight instrument, as well as a set of stair for access and three seats just like the real-life Skycrane, yet it only holds two people and uses conventional side doors.

The Skylift returns in Grand Theft Auto V and Grand Theft Auto Online bearing its appearance from TBoGT, albeit appearing in a grey color instead of blue, as well as without markings. In the enhanced version, it also features a new interior with special dials and radar systems.

The Skylift uses the same textures as the Cuban 800, albeit with the omission of the "CUBAN 800" stencil.

Due to its enormous weight, the Skylift is easily the slowest helicopter in the game. Its handling is stiffer and has low take-off and forward speed. The helicopter takes a lot of time in gaining altitude and easily loses altitude when descending too fast due to its mass, as well as having a slow movement when maneuvering the helicopter (by only yawing to approximately 90 degrees on a side takes roughly 7-8 seconds). Landing the helicopter in a busy street or an area surrounded by buildings is a challenge, due to the helicopter's sheer size and the rather large main rotor, which easily collides with street lamps and nearby buildings.

An advantage of the helicopter is that it can take a few RPGs or Buzzard rockets before catching fire. Similarly, the Skylift is too heavy to lose control when a vehicle hits the helicopter's blades, usually resulting in it being pushed away with ease while the Skylift remains steady (except if the vehicle is another Skylift).

The Skylift is powered by two large turboshaft engines, powering the six-blade main rotor. The tail carries the large transmission shaft that is connected to the tail rotor. The Skylift's engine sound is very similar to that of the Annihilator, only heavier due to the large blades.

The Skylift retains its properties as in TBoGT. However, due to the game's physics, the helicopter's handling feels slightly responsive and lighter than in its previous appearance, since its mass has been decreased. As with every aircraft in Grand Theft Auto V, the helicopter is rather fragile and may have its engines smoking with sustained gunfire or collisions.

The engine sound is the same with many transport helicopters such as the Maverick, the Police Maverick and the Swift, only with a faster pace due to the increased number of blades.

An early pre-release screenshot of the Skylift.

The Skylift carrying an APC alongside a Swift.

Close up of the Skylift's rotor hub.

The Skylift carrying the train car in TBoGT (note Luis on the rear of the car).

A Skylift in the original version of GTA V. 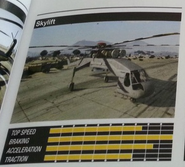 The Skylift in the BradyGames guide book for GTA V.

Size comparison with a Cargobob.

Carrying the train in GTA V.

Providing the motorcycle for a base jump.

The Skylift on the updated Rockstar Games Social Club.

The Skylift in the cinematic preview on GTA V Rockstar Games Social Club, as seen in the mission Sidetracked. 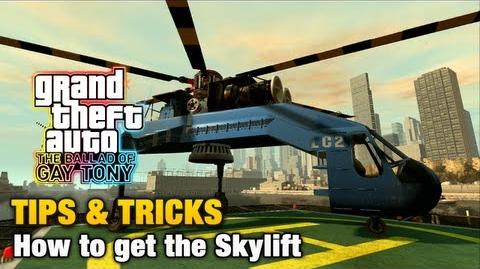 GTA The Ballad of Gay Tony - Tips & Tricks - How to get the Skylift
Video illustrating how to obtain the Skylift in PC and Xbox 360 versions of TBoGT. 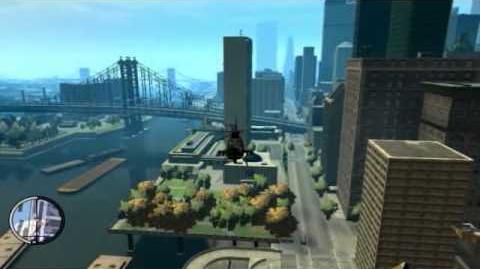 GTA TBoGT How to get the SKYLIFT on PS3 !!!
Video illustrating how to obtain the Skylift in PS3 version of TBoGT. 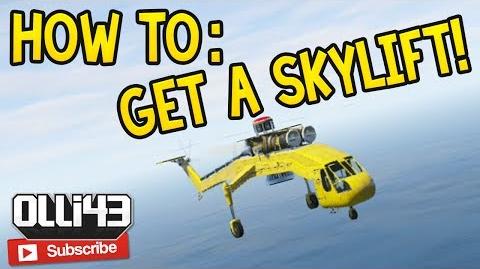 How to Get a Skylift Helicopter in GTA Online! (GTA 5 Online Glitch Guide)
How to get the Skylift in GTA Online.

The helicopter can be obtained with a minor exploit involving chasing Yusuf Amir and retrieving the Skylift after the mission For the Man Who Has Everything. The easiest method to use for this involves spawning a Buzzard as soon as he says "have fun with it", chasing the Skylift, and shooting it down over a large area, where it can be stolen. If the player is quick enough, the Skylift would have the subway wagon still attached to it.

When the Skylift is obtained, it can be saved at a safehouse as long as it has a lot of space (at least two wheels in the yellow chalked spot, the best one being the Middle Park East Safehouse). The magnet doesn't work, simply because it isn't intended to be obtainable, so there is no animation for it working (except during 'For the Man Who Has Everything').

Due to a 2012 patch by Rockstar, the Skylift is no longer obtainable in the mission For the Man Who Has Everything on the PS3 version of the game. The only way to get the helicopter on the PS3 is in the mission Caught with your Pants Down.

In fact, you can acquire the helicopter from Caught with your Pants Down without cheat codes, though you'd need an explosive shotgun and sticky bombs. A video illustrating such method can be seen here.