A group of Skinheads in Grand Theft Auto IV.

The Skinheads, also known as Dealers from game files, are a small-time gang in Grand Theft Auto IV and The Lost and Damned.

They are depicted as low-level drug peddlers, car thieves, and thugs with serious drug habits. They are most commonly found in the more deprived parts of Algonquin, although pockets of them can be found all over the city. Known members include Jimmy Kand and Marty Boldenow.

They appear to have a working relationship with the Petrovic Bratva and the Yardies. In the online multiplayer game Mafiya Work, they operate as low level drug pushers for Kenny Petrovic, as well as car thieves in Car Jack City. Their relationship with the Yardies is demonstrated by Marty Boldenow's association with them, as well as the car theft missions for Brucie; in one mission, where Niko is required to pick up a Feltzer, a Skinhead is seen dealing with a Jamaican. They can also be seen on the streets of Beechwood City talking to Jamaicans. Marty Boldenow is also protected by members of the Jamaican Mafia, armed with AK-47's.

Unlike most gangs, they don't appear to be a very organized or disciplined gang. Many members appear to be drug addicts, and they do not own any gang vehicles nor do they hang out in groups. They also tend to only spawn at night, similar to street criminals and unlike other gang members, who spawn regardless of time of day. Also unlike most gangs, skinheads may pick fights with each other; though this is usually rare without player intervention.

An interesting aspect of the Skinheads are their severe drug addictions. Drugs such as meth, cocaine, heroin, acid, and "blueberry" (a slang term for percocet) are frequently mentioned by them in discussions. Jimmy Kand and his cronies appear to be addicted to heroin, and in TLAD mission Coming Down, some of Ashley's former dealers are skinheads. These heavy addictions have made the Skinheads very aggressive; should one be bumped into thrice by the same person or hit by a car, he will immediately become hostile and attack.

They may also appear during The Fixer's Assassinations missions. They often compete in cage fights in TBOGT.

Skinheads are thin, young Caucasian males with a very distinctive appearance. Often, hair is shaved or spiked. Some skinheads dye their hair bright green. Many members also have facial hair, such as sideburns and goatees. All skinheads are tattooed.

The Skinheads are largely based on American hardcore skinheads, which the real New York City has maintained a scene of since the 1980's. This would explain their punk-like dress code, heavy drug addictions, and apparent lack of racist undertones, all of which would be at odds with stereotypical skinheads. Their spawning locations in the less affluent areas of Algonquin also mirror the areas where hardcore skinheads were common in Manhattan. Many of the bands heard on the GTA IV rendition of LCHC originated from the hardcore skinhead scene.

The Skinheads also may take influence from early Skinheads in the UK, judging from their good relationship with the Yardies and incorporating of Rasta/Jamaican symbolism in their outfits. First-wave skinheads were working-class youth who were heavily influenced by the Jamaican rudeboy subculture. 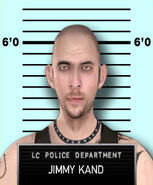 Jimmy Kand, a member of the Skinheads. 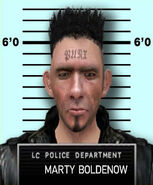 Marty Boldenow, another member of the Skinheads. 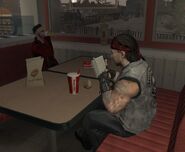 A Skinhead eating at Burger Shot with an Angels of Death biker.