It is located on Baytree Canyon Road in Vinewood Hills, Los Santos County, west of the Vinewood Sign. It is based on the real life Greek Theatre in Los Angeles. Its upper deck has wooden tables and chairs and alfresco heaters.

Sorry Commode and Anguished Cornhole are set to perform in the theater as part of the project 'Rock Da House'. Hip hop artist Clay "PG" Jackson and Liberty City duo The Blue Brothers are also stated to be performing. 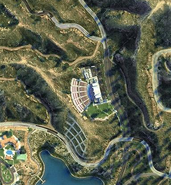