The following is a walkthrough of the Sir, Yes Sir! mission in Grand Theft Auto: Vice City.

The Rhino that Juan Cortez wants is in Vice City Mainland. The Rhino is guarded by several well-armed soldiers with Patriots and Barracks OLs around the Rhino. Provoking the soldiers will make all of them attack you with their M4s and vehicles. If the Rhino reaches a warehouse in Viceport, the mission will be failed. There are three distinct ways to acquire the Rhino.

A risky way is to kill all the soldiers guarding the Rhino. This will make the driver leave the Rhino in panic. You can also kill the gunner and you will hear what's up with the gunner? At that point the driver will get out and yell "we're taking enemy fire." Which is your cue to get in.

Another way is to block their path with a car. This will make the convoy stop and one of the soldier will exit his car to remove yours. At this time the Rhino becomes unlocked.

A safe way is to wait for them at a doughnut shop in Little Havana, across the street from the Little Havana police headquarters. The convoy will stop and the driver of the Rhino will exit to grab a doughnut. The Rhino is unlocked and ready to be stolen.

A fourth way I found to be working is the following. Grab a fast car and drive in the opposite direction of where the soldiers are coming from. Drive facing them. There will be 4-5 soldiers running on either side of the Rhino. Simply run over the 4 soldiers running on your left and quickly drive your car so far away that they can't shoot it. When you are relatively safe, go among the small buildilngs of the town, they will follow you, but you can easily find a spot where they have a hard time finding you. There you can figure it out how to kill them one by one by also hiding from them. An ideal spot would be at the taxi company that has an armor vest on the roof, or the hospital nearby has a life refill. Kill them all, and when you get back to the Rhino it would be also left alone. Get in and drive it to the garage.

You can acquire a tank for your own with failing the mission. Then use it to smash all solders in your way. Park it back. The come back to take the targeted tank.

A security protocol activates once you enter the Rhino. The Rhino is primed to self-destruct. Drive the Rhino to Cortez's garage in Little Havana to complete the mission.

Hint: Before you take the mission, steal a helicopter and take it to Cortez` yacht. after you get the mission, fly until you get above the Cafe where the army guy stops to buy a doughnut , and wait until the convoystops.Then, equip an assaul rifle and massacre the incoming guys. After all of them have been killed, jump down and enter the tank.The cops will be on you, but the only two things you will worry will be that the tank will be turned upside down by some un-well placed obstacles or that the tank will be so slow that the first policeman in sight will get you out.Don`t worry about enemy cars, every one who bumps into you will explode , and it will be even better if they come from the rear, because you will get a short speed boost. 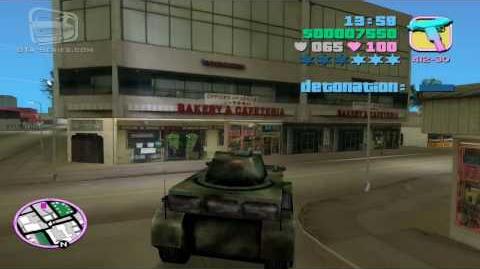 Retrieved from "https://gta.fandom.com/wiki/Sir,_Yes_Sir!/Walkthrough?oldid=994914"
Community content is available under CC-BY-SA unless otherwise noted.