• Get to the tunel entrance.

• Deliver the SUV to Lester's warehouse.

Team runs out of lives

In-game time
“Guess what I overheard on the airwaves? A team of guys are planning to steal explosives from a blast crew in the metro tunnels. How do you feel about crashing the party? You can bring the goody bags back to the warehouse.”

Sinking Feeling is a mission in Grand Theft Auto Online given to the player by Lester Crest. It is available for up to 4 players.

A rival crew is planning to steal explosives from the Pillbox North Station construction site, the team must prevent it and steal their cars. Several men from the rival crew will be protecting it. They are heavily armed and the team will need to eliminate them all to make their way to the cars easier. Once the team steals the car, they will need to make their way out of the tunnel. More guards from the rival crew will chase the team. Killing them or eliminating them, the team needs to deliver the car to Lester's warehouse in Murrieta Heights. 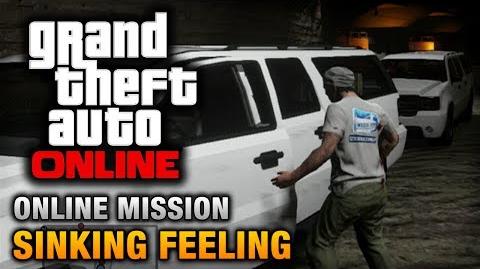