Show Me the Monet

Show Me the Monet

2 initial enemies driving a van,
+6 Mammoth Patriot, each carrying 2 persons,+1 Buckingham Maverick, with 3 persons on board

“I like beautiful things - modern houses, Aztec artifacts, impressionist masterpieces. I would pay them, of course, but sometimes that isn't possible. A painting caught my eye in the Kortz Center museum, but they won't sell it. They are shipping it to an exhibition in Amsterdam. Stop the Merryweather convoy before it gets to the docks, evade the police and bring the crate back to me.”
— Description

Show Me the Monet is a mission in Grand Theft Auto Online given to the player by Martin Madrazo. It is available for up to 4 players.

There's a crate that Madrazo is interested. The Merryweather is protecting the crate and taking it to the docks in a van, where they will ship it to Amsterdam. The team needs to steal the van and deliver it to Martin Madrazo's Lock-up in the Grand Senora Desert whilst being followed by enemy cars and a helicopter. 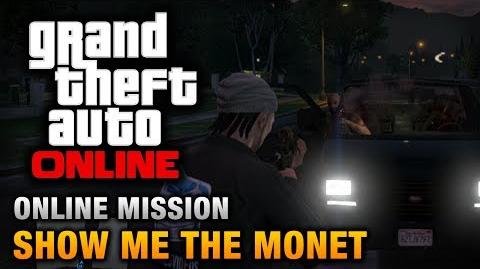