Wikipedia has an article on:
Shovel

The Shovel is basically depicted as a tool intended for digging, lifting and moving bulk materials. In Grand Theft Auto: San Andreas, however, it serves as a melee weapon.

As seen in the High Noon cutscene, the shovel was going to be wooden and shorter.

The shovel is seen several times:

The player cannot equip a shovel though, it is purely an environmental prop after it is used in the scripted events. In the game files, a texture dictionary named 'weapons_notusedfornow' includes the Shovel, indicating it was originally intended to be used by the player as a potential melee weapon.

A bloody shovel is used as a clue for the mission Treasure Hunt. Its design resembles more the one found in GTA San Andreas.

The Shovel seems to be similar to the Golf Club and the Baseball Bat.

The HUD Icon for the Shovel.

A Shovel in GTA San Andreas. 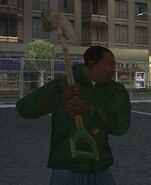 Another screenshot of the Shovel.

Unusable shovel in GTA V after switching to Trevor Philips.

The bloody shovel in GTA Online used as a clue for the Treasure Hunt mission.