Wikipedia has an article on:
Shotguns
Wikipedia

A shotgun is a powerful firearm which is suited for close quarters and which effectiveness diminishes in distance (as the bullets disperse into a wider area).

The shotguns, unlike other firearms, does not have a predefined path and instead, they will be unpredictable (since a shotgun is generally a smoothbore firearm, which means that the inside of the barrel is not rifled). The advantage of the shotgun, however, is that they can hit multiple targets at close quarters. Usually, shotguns are fed with shotgun shells, which contains various spherical pellets, creating the effect of dispersion in every shot.

The shotguns will limit mobility while wielded - the player character is not capable of sprinting and, in some games, is required to stand still when targeting. An exception is the Sawn-off Shotgun, which does not just allow the player to fire while running, but also wield two sawn-off shotguns at once.

Shotguns are not weapons designed for drive-by's, however, during the GTA IV's DLC The Lost and Damned, the player is able to use the Sawn-off Shotgun as a drive-by weapon only for motorcycles.

Prior to Grand Theft Auto: San Andreas, a close range shotgun blast can knock the player down. It makes them defenseless while on the ground, even with body armor. However, in GTA San Andreas, and games from Grand Theft Auto IV onwards, this weakness was eliminated but the player may still suffer tremendous damage at close range, or get stunned (GTA SA only). From GTA III onwards, the player may receive five free shotgun shells by entering a police car, and a shotgun will be added to the player's weapon slot if the player does not already have one.

Following is a list of all the shotguns available in the Grand Theft Auto World.

The Pump Shotgun in the GTA series resembles a different model of shotgun in each of the games that it appears. The weapon carries one shell in the tube at once, except in the HD Universe, where it carries eight shells. 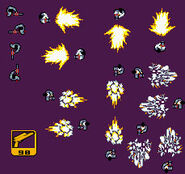 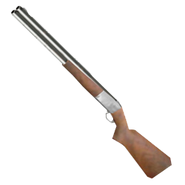 The Stubby Shotgun in the GTA series resembles a different model of shotgun in each of the games that it appears, usually a shorter counterpart of the Pump Action Shotgun.

The Combat Shotgun in the GTA series resembles a different model of shotgun in each of the games that it appears.

The Lost and Damned, usable version.
Add a photo to this gallery

The Sawn-off Shotgun in the GTA series resembles a different model of shotgun in each of the games that it appears. Its compact size makes it more versatile than a basic shotgun.

The Double Barreled Shotgun is a shotgun with two barrels, with a capacity of two rounds that are very powerful.

The Assault Shotgun in the GTA series resembles a different model of shotgun in each of the games that it appears. It is one of the few automatic shotguns and both carries eight shells.

It was featured in Grand Theft Auto Online with the Bikers DLC.

The Automatic Shotgun, exclusive in The Ballad of Gay Tony, is based on the AA-12, is a shotgun developed in 1972 by Maxwell Atchisson. The weapon is unique in being available with two types of ammunition: a more conventional version that fires buckshot, while the second one, more devastating, fires explosive rounds that can inflict heavy damage on vehicles, both available in a 20-shell drum magazine.

Probably for balancing reasons, the shotgun's fire rate is decreased compared to its real-life inspiration.

The Bullpup Shotgun is a weapon based on the Kel-Tec KSG, a bullpup 12-gauge pump action shotgun designed by Kel-Tec, only having a boxier and more squared profile and lacking iron sights on the PS3 and Xbox 360 versions only. However, the same was redesigned with iron sights on the PS4, Xbox One and PC versions. Unlike the KSG, which has two selectable ammo tubes of seven rounds each, the Bullpup Shotgun does not allow this, instead treating both tubes as one long tube of 14 rounds.

It is available for free in the Special/Collector's edition of Grand Theft Auto V.

It resembles a typical flintlock-based musket of the 19th century, but also closely resembles British Brown Bess muskets that were used by the Americans and Great Britain during the Revolutionary War, except it has a curved stock. Unlike its real-life inspiration, the player only drops gunpowder and the ball into the barrel without using the ramrod to push it. The player also fails to load the pan with gunpowder and re-cock the hammer.

Their classification is justified due to having a smoothbore barrel, though they do not shoot shells.

The Heavy Shotgun is a weapon based on the Russian Saiga-12 shotgun, a shotgun version of the well-known AK-47. The variant seen in-game is a Saiga-12K, a modernized version equipped with a shorter barrel and a folding stock, which is used by law enforcement forces in the United States.

The Heavy Shotgun has a unique property of firing slugs instead of pellets, giving it more accuracy and range, at the cost of losing effectiveness at close ranges. Like the Assault Shotgun, it is fully automatic.

It was featured in Grand Theft Auto V with the Last Team Standing Update DLC.

Retrieved from "https://gta.fandom.com/wiki/Shotguns?oldid=1148315"
Community content is available under CC-BY-SA unless otherwise noted.