Standard White - 100%
“Nagasaki's spaceflight division is responsible for some of the most stylish and combustible designs ever to crash into the Atlantic. So when the same team put together a motorcycle prototype, you can be sure it'll break rules, skulls and bank accounts from the minute it goes on sale.
Note: the production model has had all offensive and defensive capabilities decommissioned, including the energy trail.
”
— Legendary Motorsport description.

The Nagasaki Shotaro (Japanese: ショータロー, Shootaroo) is a futuristic sports bike featured in Grand Theft Auto Online as part of the Bikers update, released on November 8th, 2016, during the Shotaro Week event.

The Shotaro is based primarily on the Lotus C-01, but also shares some major visual similarities with the Light Cycle in the Tron films, more specifically, the 5th generation design featured in the 2010 sequel Tron: Legacy. This is evident by the standard neon body kit, low-profile design and wheels of identical size. Furthermore, as implied by its name, some design influences are also derived from the futuristic bike owned by Shotaro Kaneda in the Japanese manga and film, Akira; these influences include the circular panelling over the center of the wheels and fully exposed tires, if the mudguards have been removed.

The vehicle is depicted as a high-end sports bike with a seemingly rounded bodywork. The front section features a large mudguard with circular hubs attached to the forks, while the upper area has a small rounded fairing with a single circular headlight and two independent handlebars mounted on the upper plate, but lacks any form of dials. The main body is relatively large, featuring a mostly-covered engine bay with a tall intake on the front and a large fuel tank, as well as foot pegs for the rider and a single short exhaust on the right. The rear section consist of a small tail with a grey seat above and a small tail light on the end. The rear wheel is connected to the rest of the vehicle by a dual-sided swingarm, also featuring a large mudguard with circular hubs and dual suspension springs with shock reservoirs. Unlike most motorcycles, the Shotaro does not have any visible primary drive.

The Shotaro features a secondary color that glows, being much more visible at night. The glow behaves similarly to neon lights, albeit on the body of the vehicle instead of underneath it. When the bike moves, dark lines can be seen moving under the glowing secondary color over each mudguard, creating a pulsing effect that increases in speed with the bike's acceleration. Although mostly covered, the portions around the wheel hubs can support a dedicated wheel color, which can be painted by selecting a custom rear wheel, applying a color and change back to the stock wheel (as it won't reset to the default alloy color).

The Shotaro boasts an incredible overall performance befitting its price tag, making it competitive with several other high-end sports bikes. It has an extremely high top speed, marginally surpassing the Hakuchou Drag, while its acceleration and brakes are also lightning fast, as the user can easily take off just as fast as coming to a full stop. Its high acceleration and traction also allow it to hug the ground while driving at high speeds, and lets the bike climb steep hills very easily, though this makes the Shotaro poor for stunt jumps since it will not gain much air time.

Handling wise, the Shotaro has sharp handling at low speeds, great handling around curves, and is able to temporarily perform wheelies at low speeds, though it is very ineffective for lengthy wheelies due to its high speed. It loses some maximum speed while offroad, but otherwise still handles very well, though its high speed and low air time means it is prone to getting shunted by small bumps offroad and causing the user to crash.

For all its perks, the Shotaro does have one notable drawback: it is terrible at handling bodies of water, as it will cease to function if it drives into water as shallow as that of the Los Santos Storm Drain.

The Shotaro is powered by an engine whose model is similar to bikes like the PCJ 600, the Ruffian and the Nemesis. However, it lacks any indication of its exact configuration. It is coupled to a 6-speed gearbox and its sound is relatively mid-revving and loud, also shared with the Vortex.

When purchasing a Shotaro, the default color options available on Legendary Motorsport will apply slightly different colors compared to regular vehicles, due to the bike's lighting design. 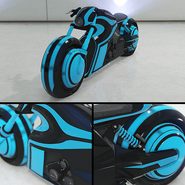 The Shotaro on Legendary Motorsport.

The Shotaro on the updated Rockstar Games Social Club.

The Shotaro in the cinematic preview on Rockstar Games Social Club.

Official screenshot in 2020, featuring 4 Shotaros in a Deadline Adversary Mode.

Alternative badge use in an advert. 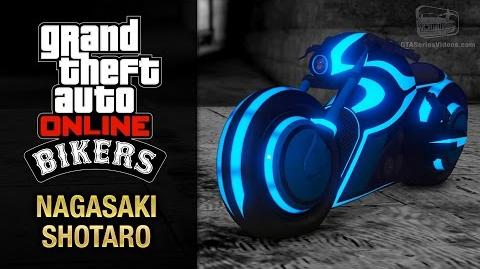