In-game time
“It’s been quite some time since Franklin Clinton and his notorious accomplices knocked over the biggest targets in Southern San Andreas. Since then, Franklin’s put down roots in Los Santos — getting married, starting a family, and even wearing a suit to work. Meanwhile, Lamar just got high. But now it’s LD’s time to come up, and he’s laying the groundwork for a legit, above-board business of his own, if he can just pull it together...”
— Short Trips description

Short Trips is a series of three missions available in Grand Theft Auto Online as part of The Contract update.

2 players are required for each of these missions.

On first playthrough, the first tip is initiated by Franklin Clinton passing on an invitation from Dr. Dre to undertake a tour of Record A Studios. Players can invite an associate to join them as they enter the studio. After meeting Franklin and Lamar Davis inside, they take a short tour led by DJ Pooh. The players find the smoking room and sit down to smoke LD Organics weed, and are joined by Pooh, Franklin, and Lamar.

They then pass out and the player and their associate have an "out-of-body experience[1]", where the host will control Franklin and the second player will control Lamar.

The second and third trip and subsequent trip replays are initiated by the host entering the studio, using the green Corona outside the smoking room, and then smoking the Special Strain.

These missions initially became available to leaders after completing the The Contract: Dr. Dre, however with effect from the Valentine's Day 2022 event week[2] all players could access the missions immediately from the Pause Menu>Online>Play Job>Rockstar Created>Missions or Quick Job from their Mobile Phone, and they do not need to be completed sequentially. The Game description in the pause menu indicated the Rank requirement was 9999, however this is a display issue only, and all players from Rank 1 can launch the jobs.

To change the difficulty from the default setting of "Normal" to "Hard" players must first complete the mission concerned without any failure and they will then be able to change it via the Interaction Menu in the Smoking Room when replaying it. Restarting the game will reset the difficulty back to "Normal".

Lamar pulls Franklin out to deal with some business and ask DJ Pooh to look after his partners for them. Franklin and Lamar travel to LD Organics to restock from his weed supply. When they reach the warehouse, Lamar discovers that it was being raided by the Vagos. After fighting off the gang members outside and inside, they leave to find Lamar's Mule loaded with stock is being taken and fight to get the truck back.

Short Trip - Fire It Up

Lamar asks for Franklin's assistance in storming the Vagos' weed storage facilities in Blaine County and destroying their marijuana plants as payback for them having destroyed his stash and the Mule.

Lamar starts by showing Franklin his new LD Organics van which he explains is made of "LD Organics patented marijuana bioplastic", and tells Franklin that he was able to make a connection with a celebrity (Jimmy Boston from the Epsilon Program) to promote LD Organics as having a celebrity would definitely make the brand into a big thing and they travel to the Redwood Lights Track to make the deal. The Vagos storm the deal due to Lamar publicising the "top-secret location" on Snapmatic. After fighting off the Vagos, the pair drive the increasingly damaged weed-van back to the city and end up at Tequi-la-la.

They're having an out-of-body experience.

It's not a hotel.

Taking their next trip.

A model of the sign on the exterior of LD Organics, trophy for completing Short Trip - Seed Capital.

A small marijuana plant, trophy for completing Short Trip - Fire It Up. 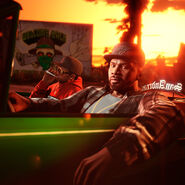 Promotional screenshot for the Short Trips.

Promotional screenshot for Fire It Up.