In-game time
“Toni, some wiseguy's found out that the Sicilian Mob are behind the Forelli-Sindacco feud. He's headed over to meet Franco Forelli right now. It works very much to our advantage that Franco knows nothing, and this war keeps on going. Take that blabbermouth out.”
— Salvatore Leone

Shoot the Messenger is a mission in Grand Theft Auto: Liberty City Stories given to protagonist Toni Cipriani by Salvatore Leone from a public phone beside Papa's 12 Inch in the Belleville Park district of Staunton Island, Liberty City.

Toni answers the public phone and is informed by Salvatore that a wiseguy has found out that the Sicilian Mafia are behind the war between the Forelli Family and the Sindacco Family and is off to tell Franco Forelli. Salvatore tells Toni to kill him before he reaches Franco, as the Forelli-Sindacco war benefits the Leone Family. Toni drives to a jetty in Bedford Point and gets into a Speeder and chases the wiseguy, destroying his boat and killing him. Once it has exploded, Toni is automatically transported to a jetty in Aspatria.

The reward for completing the mission is $3,000 and unlocks the Wiseguy Outfit for Toni. 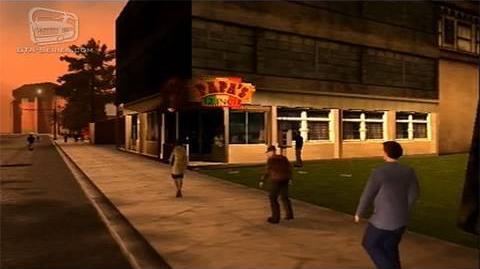 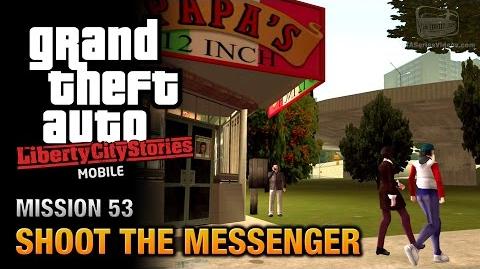