View source
watch 02:56
Raise a Floppa - The Loop
Do you like this video?
Play Sound
Not to be confused with Wrecks.

Shipwrecks are a recurring collectible in Grand Theft Auto Online, added as part of the continuation of the Los Santos Tuners update, released on August 26, 2021, during the Sultan RS Classic Week event.

“Treasure hunters and tourists are reporting sightings of a wooden boat washed up on the waterfront. The wreck is said to contain treasure and scraps of clothing, seven of which can be combined to form an outfit from a previous era. Each day, the wreck’s whereabouts will be subject to the tides. Should you spot it out on your travels, make sure to check for a chest filled with bounty.
Only one Shipwreck can be found per day — you can track whether you’ve found today’s Shipwreck via the Daily Collectibles section of the Interaction Menu.”
— Rockstar Newswire

Starting from August 26, 2021, chests are made available for players to find around the shoreline of San Andreas.

There are 30 possible locations. Each real-life day, resetting at 06:00 UTC at the same time as the Daily Objectives, a chest will spawn next to a wrecked longboat at the same random location in all online lobbies. The chests also emit a sound, similar to previous treasure hunt items, which helps with locating them. If enabled, the player's controller will also vibrate when approaching a chest. All players in the session are able to collect the same chest.

Collect all Outfit Scraps, found inside chests at shipwrecks around Los Santos, to earn a unique reward. You can track the daily discovery of the shipwreck location via the Inventory section of the Interaction Menu.

The first seven chests found will also have an Outfit Scrap upon collection. Collecting seven Outfit Scraps rewards the player with a unique outfit.

After seven have been collected, players will still receive cash and RP for collecting subsequent daily chests. 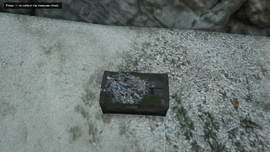 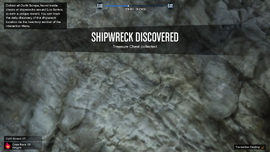 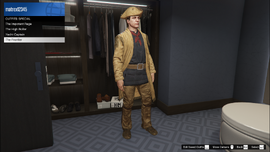 The chest may not appear for some players even when the boat is present, and the daily Outfit Scrap collectible may not reset daily, or be marked off automatically without having collected it, nor having received the cash.