Standard White - 100%
“The latest from the two-wheel powerhouse Nagasaki. With force like this, all you need to worry about is an overactive wet sump lubrication system. The bike will be fine.”
— Legendary Motorsport description

The Nagasaki Shinobi (Japanese: 忍び, しのび) is a sport motorcycle featured in Grand Theft Auto Online as part of The Contract update.

The bike is depicted as a sports motorbike with a distinctively aerodynamic design, featuring a front mudguard mounted on the forks, while the upper area assumes a similarly-shaped fairing like the Thrust, with dual headlamps, a small windscreen with black supports, and black rear-view mirrors mounted on each side of the fairing, with amber indicators on the front. Near the upper plate, there is a rectangular section with the "Sports Bike" dial set, as well as two independent handlebars.

The main body is mainly composed of a black frame and a painted body with large vents in the middle, as well as a lower fairing with smaller vents and a large-sized fuel tank with a silver cap on top. The engine bay is mostly covered by the body panels, having a clutch cover and a large exhaust tube on the right, the latter with black detail. The foot pegs for the rider can be seen on the lower section of the black frame.

The rear section consists of a grey seat and foot pegs for the passenger that are mounted on the rear section of the aforementioned frame, while the rear fairing houses red tail lamps on the end. A black frame extends from below the rear fairing and has amber indicators mounted on each side and the number plate in the centre. The rear wheel is connected by a black swing-arm that is supported by a single suspension spring, fitted with a long protector on the upper side of the left chain drive.

The primary colour of the bike is applied to the entirety of its bodywork, while the secondary colour is applied to the front fork legs. It retains the same 7-spoke rim design similar to the "Racer" rims available in mod shops, albeit finished in a silver/alloy colour. 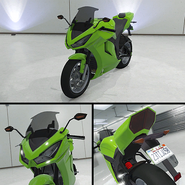 The Shinobi on Legendary Motorsport.

The Shinobi in the cinematic preview on Rockstar Games Social Club.

Official screenshot on a newswire advertisement during the Granger 3600LX Week event. 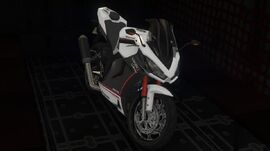