GTA Wiki
Register
Don't have an account?
Sign In
Advertisement
in: Cleanup, Missions, Missions in The Lost and Damned
English

Roman's Holiday
Diamonds in the Rough

Shifting Weight is a mission in The Lost and Damned. It is the last mission that is given by Elizabeta Torres to Johnny Klebitz.

The mission starts with Elizabeta telling Johnny and her associates that she believes that she is being pursued by the police. She wants the cocaine delivered from the previous mission to be sold as soon as possible.

Johnny, Malc and DeSean all head out to the deal over by the basketball courts. During the deal, one of the buyers decides to take the drugs without payment. To demonstrate that she is serious, she shoots and blows up Johnny's Hexer. In return, Malc kills the female buyer. The other dealer gets away, and police arrive.

Johnny must now ride as the passenger on Malc's bike as they escape. The police give chase in numerous police cars, Enforcers and helicopters. As Johnny, the player must defend himself, DeSean, and Malc by shooting the pursuers down.

Johnny is on the back of Malc's bike for the remaining part of the mission; all the player has to do is shoot an endless amounts of cops with the Assault Shotgun and defend DeSean. Fortunately, the Assault Shotgun has unlimited ammo, so there's no need for the player to reload. During the chase, several red explosive gas canisters that cause huge explosions when shot are encountered and the explosions will take out several cars at once. Also, after passing through the gas station, the player can hit one of the pumps for a cinematic that shows the station erupting and destroying any close police vehicles as Malc and Johnny narrowly escape the explosion.

Around halfway into the chase a Police Maverick joins the pursuit. Near the end of the mission the player becomes trapped in the Grotti car dealership. They escape by either shooting the window to get out or waiting for Malc to drive through the window himself. The final part is a straight chase under the highway bridge with a total of three cop cars following the player there. Malc shoots the driver in the final cop car. The cop car hits the side of the post and one officer comes flying out of the windshield, cinematic style.

Johnny gets off of Malc's bike, giving them the drugs and bids farewell to them. Johnny then calls Elizabeta saying the deal went bad and Elizabeta says to stay away from her, as the heat is closing in. 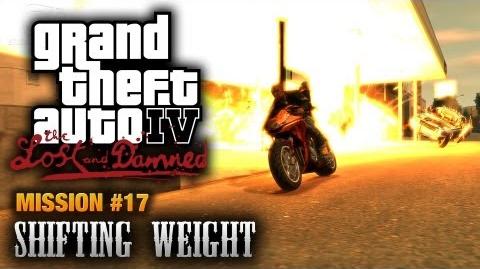