Spoiler Warning: Plot details, ending details, or both are in the text which follows.
Not to be confused with the Sherman Reservoir.

“The Dam that powers the West Coast. Las Venturas was built on the back of power from this dam. A national institution, with terrible security.”

Sherman Dam is a dam located between the Bone County and Tierra Robada regions of San Andreas in Grand Theft Auto: San Andreas.

Built in the 1930s and taking over 15 years to finish, the Sherman Dam is one of the seven man-made wonders of the world.[1] It physically separates the Sherman Reservoir from the remaining waterways in San Andreas, allowing it to regulate the height of the river below.

This enormous structure is based on the Hoover Dam in Nevada, and provides nearby Las Venturas with hydroelectric power. The dam's generator room can be accessed by entering one of the elevator towers atop the dam, however, an alternate entrance at the foot of the dam is used during the mission "Dam and Blast", where the dam is prominently featured.

After arriving in Las Venturas to meet with Wu Zi Mu at his new headquarters - the Four Dragons Casino, Carl Johnson begins planning a heist of Caligula's Palace, located just up The Strip from the Four Dragons'. Caligula's is being taken over by the Leone Family, giving Carl the opportunity to gain the trust of Salvatore Leone and provide himself a cover for planning the heist.

As part of the plan, Carl heads to the Sherman Dam to plant explosive charges at the generators that provide power for the city - remotely detonating these which sends Caligula's into a blackout, allowing his team to access the casino's vault under the cover of darkness and the resulting confusion. In order to infiltrate the dam, Carl boards a Nevada waiting for him at Las Venturas Airport, flies out to the dam, and parachutes his way onto the dam quay where he discreetly makes his way inside the complex. Once there, Carl sneaks past security guards and plant technicians in order to place the explosive charges. On his way out, Carl is trapped on top of one of the dam's elevator towers, and is forced to perform a swan-dive into the dam's outlet channel to the south (mislabeled as the Sherman Reservoir) in order to evade capture. 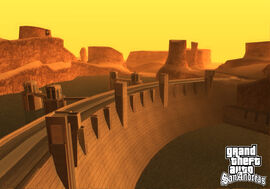 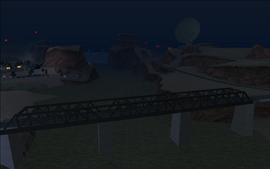 Sherman Reservoir as seen behind the dam.