GTA Wiki
Register
Don't have an account?
Sign In
Advertisement
in: Pages with non-numeric formatnum arguments, Vehicles, Vehicles in GTA V,
and 6 more

The Sheriff SUV is a variant of the Granger modified for Sheriff/NOOSE use, inspired by Los Angeles County Sheriff's vehicles.

The vehicle is identical to the regular version in terms of design and features, but comes with a large front pushbar, blacked-out grille, spotlights on the cabin A-pillars and LED flashing red/blue lights on the grille, mirror wings, roof and rear window, as well as flashing tail lights and various antenna on the rear portion of the roof and on the rear left quarter. The car also has an unknown window tint applied by default.[1]

The vehicle comes in a black/white paint scheme with yellow "SHERIFF" markings around, as well as aerial roof numbers alternating between the following combinations: 05, 32, 76, 84. Like several other marked police vehicles, the SUV features a number on the rear fascia that always end in the two digits of the aerial roof number. Files indicate that the vehicle spawns in white, which is actually applied on the doors and the roof (although only one example spawns in black with a white portion for the roof number). Its rims are also different compared to the regular Granger, being similar to the industrial rims seen in industrial vehicles such as the Mule, the Benson and the Phantom, albeit with a black finish.

In the PlayStation 4, Xbox One and PC versions of the game, the vehicle uses a higher-pitched variation of the one used on the FIB Granger and the FIB Buffalo. This one cannot play a distorted sound, even if damaging or shooting the siren.

The Sheriff SUV, along with the FIB and the Park Ranger, is easily the best performing SUV in the game. It improves on the civilian vehicle in every way, with good acceleration (about on par with the Interceptor), and stiff suspension, which prevents it from rolling over in high speed turns. It also has a high top speed, great off-road performance, and decent brakes. It shares the same handling line with its FIB equivalent.

The Sheriff SUV is a large vehicle, and because of this, can hold up to eight passengers (four inside and four outside), which makes it one of the largest capacity vehicles in the game in this regard. The Sheriff SUV, due to its great torque and weight, is able to barrel through most cars on the road, including roadblocks, fences, and even larger cars. The passengers hanging onto the outside are able to use Assault Rifles and Light Machine Guns while being driven, making this car excellent for drive-by's and assaulting other cars. Care must be taken by the driver of the vehicle when players are riding on the running boards since they can be knocked off and killed in collisions.

The Sheriff SUV is powered by a turbocharged twin-cam Inline-4 coupled to a 5-speed gearbox in a front engine, all-wheel drive layout (60% front, 40% rear). However, the cover of the engine is more like that of a V8. It supplies enough power for each wheel to gain large amounts of traction and maintains it firm on the ground, which rarely loses speed when going through dirt or sand. Its engine sound is the same one from the regular version, the BeeJay XL and the Bodhi.

A Sheriff SUV in the original version of Grand Theft Auto V. Note the unusable lights behind the windshield. (Rear quarter view)

The Sheriff SUV on the updated Rockstar Games Social Club.

The Sheriff SUV in the cinematic preview on Rockstar Games Social Club. 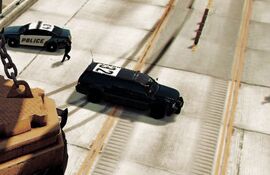 A unique black Sheriff SUV appearing in The Fleeca Job.

Just like the FIB Granger, the Sheriff SUV is much more challenging to obtain than other police vehicles.