Shelia only appears on the official website in the customer testimonials [1] for Tattoo Parlors titled "Hall of Shame".

According to her testimonial, she received a tattoo of her brother's name inside a heart so that she would look classy, even though her boyfriend grows jealous of it.

Her character model (sometimes complete with tattoo) does appear among the Pedestrians in game and is available in Director Mode as "Beach Bum - On the Promenade". She will sometimes be seen when switching to Franklin Clinton when he is exiting Smoke on the Water at Vespucci Beach.

Shelia White on the Dignity yacht in the Pacific Ocean near Del Perro Beach. 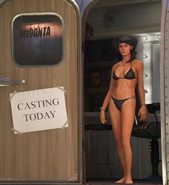 The NPC model used for Shelia.
Add a photo to this gallery

Retrieved from "https://gta.fandom.com/wiki/Shelia_White?oldid=1163604"
Community content is available under CC-BY-SA unless otherwise noted.