View source
watch 02:52
Roblox: DeepWoken - The Loop
Do you like this video?
Play Sound
For other uses of the term Shark, see Shark

Up until GTA V, they were often associated with myths, given that their appearance is rare in both GTA Vice City and GTA San Andreas. While harmless in both aforementioned games, sharks are, on the other hand, deadly in GTA V.

Sharks are modeled after Bull Sharks in GTA Vice City. Even though not as common as most sea creatures, they can be spotted everywhere in the waters of the city and, due to the slightly similar body, they can sometimes be mistaken as dolphins. Sharks do not take damage when shot at, and like other marine animals in Vice City, don't have any movement animation when swimming. The easiest way to spot a shark is to just search the water for it, preferably through a Sniper Rifle. The player can also kill a shark by throwing grenades at it.

Sharks are also mentioned in the 10th page of the GTA Vice City manual: "Shark attacks off Vice City happen a few times a year and there are more sharks out there than you would like to think - Best advice: Stay out of the water!". This might suggest that sharks could have been used as an excuse for the player's inability to swim in Vice City.

Sharks appear in GTA San Andreas, but are rare and are not hostile towards the player. Given the somewhat murky waters in some areas of San Andreas, in particular San Fierro, the species in the game is most likely the bull shark, which is similar in appearance to the tiger shark.

Sharks appear in varying depths of ocean around San Andreas and, unlike their 3D Universe versions, are fast and dangerous predators that often attack the player on sight. In the regular PS3 and Xbox 360 versions of the game, the only present sharks are modeled after a hybrid of the Bull Shark and the Tiger Shark. In the enhanced version, while playing as one of these sharks after eating a Peyote plant as Trevor, he states that they are Tiger Sharks.

According to Abigail Mathers in the "Death at Sea" stranger mission, the sharks in San Andreas are bordering on extinction, explaining how they seldom appear in-game. Getting killed by a shark unlocks the "Out of Your Depth" Achievement/Trophy.

Spawning more frequently at night, sharks appear on the minimap as a red dot (enemy) and will stalk and circle the player for a while before attacking. Sometimes, they will appear in pairs. If the player reaches the end of the map (where vehicles will no longer function), a shark is scripted to appear and kill the player in order to prevent them from venturing any further. Sharks attack once, killing on the first attack, by grabbing protagonist with their teeth and then shaking their bodies. If the player is on the surface they can sometimes see the shark's fin sticking out the water as it circles.

Sharks can be killed if the player is on a boat and shoots one, which only takes one shot. It is, therefore, recommended to look out for sharks and kill them from the surface before diving into the water. They can also be killed in the water by repeatedly attacking with a knife (although this is extremely difficult), or running into them in a boat or Submersible. If the player is in the water and is too deep down/far out to return to their boat or the shore in the event of a shark encounter, swimming into sunken plane and ship ruins will often cause the shark to go away. Like other animals in the game, live sharks are only present in GTA V.

The PC, PlayStation 4 and Xbox One versions of GTA V have, in addition to the existing Tiger sharks, Hammerhead Sharks as part of the fauna. However, unlike the Tiger Sharks, they never attack the player.

A screenshot of a shark and a scuba diver in GTA V.

A hammerhead shark about to be stabbed.

A school of hammerhead sharks in GTA V (enhanced version).

The shark sculpture on Vespucci Beach.

A corpse of a tiger shark on the eastern shores of Cayo Perico in GTA Online. 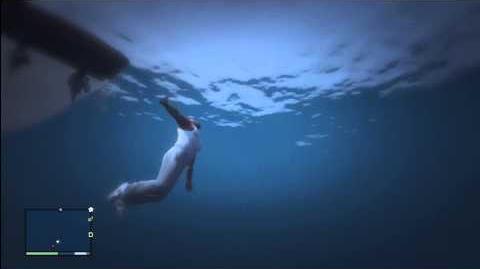