S_M_M_Gentransport (Pilot)
“The Shamal is a mid-size business jet known for its climb and cruise performance, balanced handling and economical fuel consumption. At current gas prices, you can fly a Shamal coast to coast for just $50,000, without even a second thought for the Ozone layer.”

Similar business jets also makes multiple appearances in other Grand Theft Auto games, although they are uncontrollable and are only used as props.

The aircraft model is based on the Learjet 55. The aircraft nose is considerably longer than most Learjets, also resembling a later model. It has a light grey paint job.

The Shamal's interior can be seen during Freefall. The size of the interior appears larger than usual for an aircraft with a relatively small fuselage, and the interior incongruously features 16 windows (9 on the left and 7 on the right) when the plane features only 8 outside. Despite this, the plane has a very limited passenger capacity.

The Shamal appears in the first trailer and later in one of the screenshots for Grand Theft Auto V, implying that it would most likely return as a functional plane. This was eventually confirmed by the gameplay trailer, that showed the Shamal being flown over the Land Act Dam.

The Shamal is based on the Learjet 45, with influences from the Embraer ERJ 145 and Cessna CitationJet, especially around the cockpit. The role of the aircraft is now different though — instead of being a business jet, like in GTA San Andreas, it is now a commuter jet, being owned by multiple airliners for short regional flights. The role of a private jet is now attributed to the Luxor, a plane very similar to the Shamal (only with a black paint scheme and a slightly different pitch of engine sound) also manufactured by Buckingham. It has 16 passenger windows in total (8 on each side).

The Shamal is only available in an Ice White colour with an airliner livery applied to it, being: MyFly, Air Emu, Air Herler and FlyUS. These liveries are applied on the sides as two-tone stripes, the winglets, the engines, and the tail. It also has one window on either side that are marked with red outlines, indicating the cut-out zone in event of emergency.

In the enhanced version of the game, the Shamal was changed after the After Hours update. For reasons unknown, every livery for the Shamal with the exception of MyFly were removed, resulting in a contradiction in Caida Libre where an Air Emu livery Shamal is meant to appear instead. These liveries were restored with the following update, Arena War, claiming they were "accidentally removed".[2]

The Shamal is available to the player at the beginning of Grand Theft Auto: San Andreas, in Los Santos International Airport, acquirable by trespassing over the security booth if the player still hasn't got the pilot's licence. It is a considerably fast jet, being on par with the Rustler, and due to its availability, the Shamal is a good choice for players who are just learning to fly jets, as its handling is balanced and it's easy to land on runways. Also, despite it visually having a large passenger capacity, it can transport only the player. The Shamal is somewhat decently agile in terms of manoeuvrability, and its availability to the player early in the game provides an easy way to grind their Flying Skill stat before even reaching Verdant Meadows Airfield much later in the storyline.

The Shamal is now a much faster aircraft, beating any propeller-powered plane in the game and being on-par with the Luxor as the fifth fastest aircraft in the game, beaten by the Vestra, the Besra, P-996 LAZER and the Hydra. Similar to San Andreas, it is also available from the start in Los Santos International Airport and, due to having a great and responsive handling, it remains as a great plane for learning to pilot and similar to the Luxor, players can easily evade police attention if they didn't purchase a hangar yet. In the hands of a moderately skilled pilot, it can easily win any multiplayer races. Thanks to the speed and handling of the aircraft, it also has a great capability for performing stunts, being able to steer and perform aileron rolls extremely fast.

Upon being converted into a personal aircraft, the Shamal can have one of the four livery sets mentioned above. However, there is no way to change its base colour.

A Shamal in flight in GTA San Andreas.

The interior of the Shamal in GTA San Andreas, towards the back. (Towards the cockpit)

Front view of the Shamal.

A Shamal in the first trailer.

The Shamal flying over the Land Act Dam, in the gameplay trailer. It seems to lack any livery, unlike the one in the actual game.

Another screenshot of the Shamal, also lacking an airline livery.

The destroyed Shamal at the end of the mission.

A MyFly Shamal flying over the Grand Senora Desert.

Screenshot of the Shamal in Grand Theft Auto V.

A Shamal flying away from San Andreas. 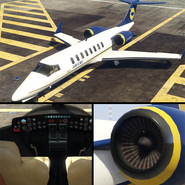 The Shamal on the updated Rockstar Games Social Club.

The Shamal in the cinematic preview on GTA V Rockstar Games Social Club.

The Shamal in the cinematic preview on GTA Online Rockstar Games Social Club.