Do You Have Protection?
Concrete Jungle

Shadow is a mission in Grand Theft Auto IV given to protagonist Niko Bellic by Rastafarian Little Jacob from his apartment on Dillon Street in the Schottler district of Broker, Liberty City. 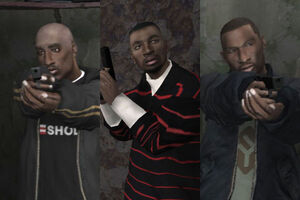 As Niko enters Little Jacob's apartment, he gets a surprise introduction from Badman by being pinned down, and threatened with a box cutter. Jacob assures Badman that Niko is friendly, so he helps Niko up off the floor. Jacob then explains that there are dealers dealing drugs in their turf and they are not getting any profits from them. Badman wants Niko to head to Wallkill Avenue in Fortside and follow a dealer to the supplier.

When he arrives, Niko follows the dealer as he heads back for more product to sell. Niko can go ahead and initiate a running chase with the dealer, or quietly tail him without being seen. If initiated, during the chase, the dealer will narrowly avoid being hit by a car, and will make a few attempts to stop Niko from catching him.

When Niko reaches the dealers apartment the door will either be unlocked or locked, depending on whether or not you spooked the dealer. If the door is locked, Niko will have to shoot the lock to open the door.

There are three men in the apartment that must be taken down.

When the job is done, Niko will call Jacob to inform him that the competition is finished.

The reward for completing this mission is $250. The mission Russian Revolution is unlocked. (only if The Master and the Molotov is completed first.)

Also, you can now do friend activities with Jacob. You can also deliver packages for his drug operations, selecting the Job option on your phone.

Retrieved from "https://gta.fandom.com/wiki/Shadow?oldid=666687"
Community content is available under CC-BY-SA unless otherwise noted.