Luis attacks the boat with the Buzzard.

• ­Get a boat from the marina.

• ­Watch out for patrolling boats protecting the yacht.

• ­Take the chopper to the helipad.

• ­Take out the fleeing arms dealers.

Sexy Time is a mission in The Ballad of Gay Tony. It is the first mission given to protagonist Luis Fernando Lopez by Yusuf Amir.

Yusuf wants to take an attack helicopter called the Buzzard. This aircraft belongs to a group of arms dealers, and is located on a yacht. Luis makes his way to the boat using Yusuf's speedboat. He infiltrates the yacht without being seen by security, and then steals the helicopter. While Luis is returning to the Yusuf's heliport, Yusuf calls him and requests that he go back and destroy the yacht with the Buzzard, killing Frickie Van Hardenburg in the process. After spectacularly sinking Frickie's yacht, some of the arms dealers flee in speedboats, so the final task is to eliminate them. If you have trouble by taking them out, just follow them, as they will eventually stop on the beach near the Alderney Casino and try to escape on foot. Simply land the Buzzard and kill them.

"Murder in the harbor."

Mike Whitley: You said it, Lori. Murder indeed. And in the harbor. It seems not everyone agreed with the government's decision to allow accused arms dealer and alleged war monger and slave trader Frickie Van Hardenburg into the country. Days after he was allowed in by immigration his motor yacht was attacked in a violent incident in the harbor and several members of the senate are now worried that their campaign contributions may dry up. Locals have also gone into a state of panic."

"A controversial South African business man was killed in a violent incident in the harbor yesterday. Frickie Van Hardenburg, who had only recently been granted a visa to enter the country was relaxing with pals on a motor yacht, when an assailant attacked and killed him and his friends."

"Mr. Van Hardenburg was loved by some and hated by many who accused him of being envolved in all manner of nefarious activities. Having been accused at various points of arms dealing, drug trafficking, slave trading, incest, and supporting repressive regimes, some will not mourn his passing, but many in government enjoyed vacations at his ranch and hunting endangered species on his farm."

"The military industrial complex claims another victim. Notorious agent of death, Frickie Van Hardenburg was killed yesterday, seemingly in the middle of an arms deal. Having only just been allowed a visa to enter the country, the slave trader and arms dealer that human rights groups have been trying to put on trial was himself the victim of horrific violence, after a bloody attack by an unknown assailant on his boat, seemingly killing all on board. This is the kind of violence we expect when the government cares more about weapons than health care. Mr. Van Hardburg who saw himself as a legitimate businessman, but who had links to countless repressive regimes in Africa and the Middle East, and who has been implicated in slave trading in Asia, along with diamond dealing and above all weapons smuggling into conflicts across the globe, who will no doubt mourn his passing and the healthy campaign donations he made."

Luis destroying the yacht.
Add a photo to this gallery 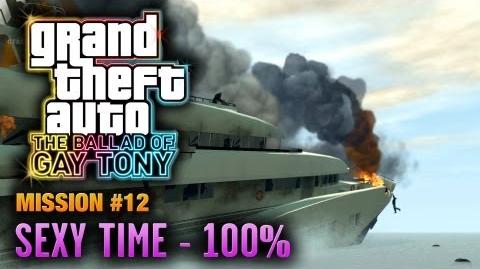 Retrieved from "https://gta.fandom.com/wiki/Sexy_Time?oldid=1178338"
Community content is available under CC-BY-SA unless otherwise noted.