Set of the Grove Street Families

"Carl, no time to chit chat. Being seen in Seville Boulevard bia, words out and the boys don't like it. I'm pinned down in the Seville's hood and we need a ride out of here, pronto!"
— Sean "Sweet" Johnson, during the mission Sweet's Girl.

The Seville Boulevard Families are one of the three sets of the Grove Street Families gang, featured in Grand Theft Auto: San Andreas.

The Seville Boulevard Families are based in the district of Playa del Seville. The set's origins are unknown, however it is likely they were already around in 1987. They split allegiance with the Grove Street Families and Temple Drive Families sometime between 1987 and 1992, as CJ reveals in the mission "Nines and AKs" that he doesn't know about the estrangement between the two factions, until Big Smoke explains it to him.

It is possible the rivalry stemmed from a different approach to the drug trade, and while the GSF is against drug trafficking, the other two sets may be involved in the narcotics business.

The Families may have controlled parts of Willowfield prior to 1992, as Emmet lives there.

Carl Johnson (a member of the Grove Street Families) is first notified of the rivalry with Seville by Big Smoke during the mission Nines and AKs, in which CJ and Smoke go to visit Emmet, a member of the gang. Sweet Johnson also mentions the set in phone call after the Ryder mission.

During the mission Sweet's Girl, Seville gangsters attack Sweet (the leader of the Grove Street Families) and his girlfriend, who lives in Playa del Seville. After helping Sweet fend them off, Carl drives the two back to Ganton. After they arrive, Sweet expresses his disapproval of the "green on green" war.

Members of the Seville Boulevard Families, along with the Temple Drive and Grove Street Families, decide to meet at the Jefferson Motel in Jefferson in order to reunite the gang. The meeting is disrupted by the Los Santos Police Department; however the gang war seems to have calmed down after the meeting, and is not mentioned again.

The only known individual member is Emmet, however it is possible LB is associated with the gang, due to him owning a lock-up garage located in their territory and allowing Ryder to store the robbery van inside the garage.

The gangsters that can be seen walking and driving in Seville territory use the generic Grove Street Families model, and can be recruited just as members of other sets can.

Possibly, Sweet's Girlfriend is a member of Seville Boulevard Family, due to her house location in Playa del Seville

Sweet shooting at a member of the SBF. 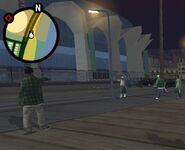 Three Seville members in a gunfight with a member of the Vagos.

Retrieved from "https://gta.fandom.com/wiki/Seville_Boulevard_Families?oldid=1297750"
Community content is available under CC-BY-SA unless otherwise noted.