• ­Go to the Grand Senora Desert.

• ­Intercept the next Merryweather Cargobob.

• ­Go to the Sandy Shores Airfield.

• ­Deliver the Dune FAV to the drop off.

• ­Help deliver the Dune FAV to the drop off.

Out of lives.
Dune FAVs destroyed.

"Intercept and take down Merryweather air supply lines in Blaine County. Weaponized Dune buggies will be issued to the team and should be returned upon completion."
―Description

Severe Weather Patterns is a Mobile Operations mission featured in Grand Theft Auto Online as part of the Gunrunning update.

Agent 14 briefs the crew that Merryweather is mounting a large scale operation in Blaine County, moving supplies by employing aircraft. He orders the crew to get into the buggies and intercept their operations and bringing their aircraft down. There will be two Dune FAVs, the first one with a mounted MG and the second one with a mounted Minigun. (If there are only 2 players, only the MG one appears)

The crew have to move from Grapeseed to Sandy Shores to intercept the first Cargobob, taking positions so the gunner/s can attack them with the mounted guns. An enemy will throw explosives from the rear bay. Once done, Agent 14 advises the location of the second helicopter and the team moves to Harmony. Once near the vehicle, Agent 14 warns that the second Cargobob is escorted by a Buzzard Attack Chopper. The team then proceeds to take down the Cargobob and optionally, the Buzzard.

After bringing down the Cargobob, Agent 14 advises that a Titan is prepping for take-off from the Sandy Shores Airfield. The team moves to the location and destroys both the plane and optionally the escorting Mesa. Immediately after that, Agent 14 announces that a Titan is spotted flying low over the dirt road close to Alamo Sea and heading to Sandy Shores, along with two Froggers. The team moves to the next location and brings the Titan and optionally the remaining choppers down.

Right after bringing down the second plane, Agent 14 informs that the last helicopter is flying over Los Santos Freeway and the team have to bring it down. As they start approaching the objective, Merryweather starts to intercept the buggies in their Mesas, even making a roadblock on the freeway. The helicopter also has an enemy who also throws explosives.

After taking out the last helicopter, Agent 14 comments that Merryweather "took a beating" and "salvage team are in play". He then orders the team to bring the Dune FAVs back to the drop off point in Cypress Flats. On the way, they may encounter some Merryweather resistance, but they are not much of a problem to the team if they are left behind as the Dune FAV can easily avoid them. There will be a small area with two agents next to two containers and a Phantom to one side. Once all the vehicles are at the drop off point, the mission ends. 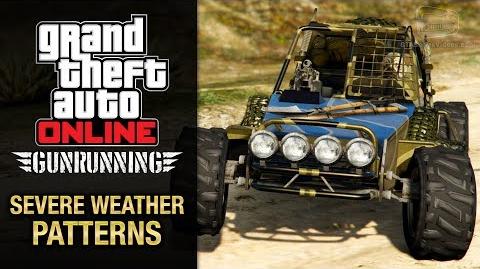 Retrieved from "https://gta.fandom.com/wiki/Severe_Weather_Patterns?oldid=1092710"
Community content is available under CC-BY-SA unless otherwise noted.