In-game time
“We fired a dealer last night, and somehow he swiped a bag of takings on his way out. That shouldn't be possible, so the quicker and quieter we deal with this, the better. Head over to his place, do whatever you do, and don't leave a trail.”

“Okay, here's the deal. We have a rogue dealer on our hands, he grabbed a bag of bills, snuck out the back, and it looks like he's planning to emigrate. I need that money back, and I need every other part of this shitshow to go away.”

Severance is a Casino Work mission featured in Grand Theft Auto Online as part of the The Diamond Casino & Resort update. It is a freeroam mission given to the player by Agatha Baker.

Ms. Baker informs the protagonist of a dealer who has stolen money from the casino and that she needs the money back.

The player is instructed to go to the croupier's apartment, which is located in Chamberlain Hills, Rancho, or Vespucci Beach. Once the player arrives there, a short cutscene will play; the dealer, carrying a red backpack containing the stolen money, is seen escaping on a Sanchez from a nearby alleyway. Another Sanchez will be near the marked location in case the player has no vehicle.

The player needs to chase down and kill him before he reaches his destination - the airport. If he makes it there, he will attempt to drive to one of the three possible locations, which are guarded by security guards:

The player can still kill him after he gets in the vehicle, as this is not a fail condition. When the croupier is dead, he will drop his backpack, which needs to be picked up and delivered to the casino. Once the stolen money is returned, the mission is completed and Agatha will call the protagonist to commend them for their good work.

“Well, I'm sure you sent a message. Good Work.”

“Nice work. You know, you are so much more efficient than the police.” 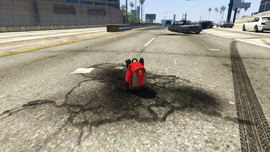 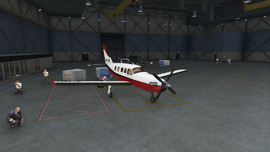 The Velum 5-Seater with which the croupier can try to escape. 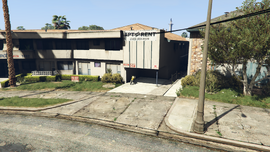 Location in Chamberlain Hills. The croupier will flee from the alleyway to the left of the building. 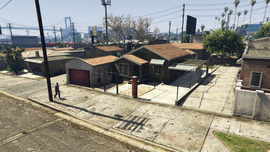 Location in Rancho. The target will flee from the alleyway to the left of the house. 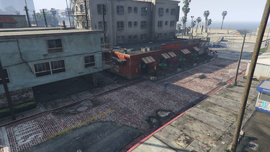 Location in Vespucci Beach. The target will flee from the alleyway to the left of the red building.