Standard White - 100%
“Dewbauchee only made a handful of these beauties, and that's not just because of their track record of corporate embezzlement. No, it's a result of a commitment to individual aspiration and strict exclusivity that stems from a deeply held belief that the one percent is the only percent that matters. And if that sounds like an opportunity to prove something, it is.”
— Legendary Motorsport description.

The Dewbauchee Seven-70 is a two-door coupé featured in Grand Theft Auto Online as part of the Further Adventures in Finance and Felony update, released on July 5th, 2016, during the Seven-70 Week event.

Being a Dewbauchee vehicle, the vehicle is based on an Aston Martin, specifically on the Aston Martin One-77, seen particularly in the greenhouse area, side profiling, and wheel-spoke design. The car also takes a large amount of influence from the Ferrari F12berlinetta in the front fascia, particularly in the front grille and central bonnet vent – its element design as well, visible in its headlights (though the Seven-70's headlights are smaller) and the unique side vents which link airflow from the bonnet along the flanks of the car.

In the front profiling, the car features many grille elements, with a significant curve running from the wings of the car down to the base of the front, supporting two vertical elements of the main grille. Below this is a carbon-fibre splitter, and beside the grille and splitter are dual intakes that direct airflow through the front brakes. The upper area of the Seven-70 has LED headlamps on the outer sides, with carbon-fibre bezel interior and LED strips running down the outer side of the lamp. In its stock configuration, the vehicle has three grilles positioned on the bonnet: one centralised at the front directly behind the car emblem and two just above the car's front wings.

On the side profiling, the car's belt line down the side of the car remains straight until reaching the B-pillar, where it splits to form a character line which results in the large curved boot of the car. The Seven-70 has a simple sharp groove down the side, which is similar to that found on the F12berlinetta. This groove forms as part of a fender vent/gill which runs inline with the curvature of the front wing, directly behind the front wheels, together with silver/chrome trim above, cut in half by the front door line. The line formed as part of the door pillar is also based on the One-77's. Behind the side window, there is a small window channel, followed by a much smaller window which ignores the typical curved shape found on other sports cars. The vehicle has a carbon-fibre roof and silver side door trim, as well as sleek mirror wings near the A-pillar. The rear window is rather small and resembles the One-77's.

The rear fascia is slightly different from those of most other Dewbauchee vehicles, omitting the signature C-shaped rear lights. Instead, the Seven-70 features much smaller rear lights that are predominantly red, with the lowermost being the reverse lights. The top area curves upwards and extends a bit towards the rear to form a lip spoiler, which has a flat profile on the centre, where the boot lid is located. On the lower area, the Seven-70 has twin-exit twin exhausts with chrome circular exhaust tips and carbon-fibre-grille exhaust housing, all positioned behind the rear wheels. Also on the rear is a large six-element, carbon-fibre diffuser, with a central grille splitting the diffuser in half below the rear number plate in an inset body panel. The Dewbauchee logo is placed on top, over the rear portion of the boot lid. The interior of the car is the same as that found in the Rapid GT and 9F.

The vehicle only has a single colour, which is applied on the bodywork, mirror wings and interior stitching. The wheels have a unique rim design, consisting of six spokes with a rather concave portion around the centre, fitted with low-profile tyres.

The car is a high-performing car for its class, falling short of the power and acceleration required of a supercar, although the Seven-70 has a very high top speed. The car has a relatively heavy weight, a fact that, along with its RWD drivetrain, means it lags behind other sports cars in terms of acceleration. It also suffers from poor traction. It is slightly heavier than the Rapid GT, but it is still lighter than the 4-door Exemplar and the 2-door Massacro. The car has a six-speed gearbox that gives it much more potential in speed, whereas a few other sports cars have only five-speed gearboxes.

The engine sound is a variation on the Massacro's and F620's, being a high-revving engine, with smoother timing and louder combustion. The engine cover appears to be a V8 with cold-air intakes from the grilles. 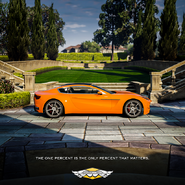 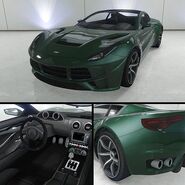 The Seven-70 on Legendary Motorsport.

The Seven-70 on the updated Rockstar Games Social Club.

The Seven-70 in the cinematic preview on GTA Online Rockstar Games Social Club.