• ­Wait for your team to get into a Deluxo.

• ­Wait for SecuroServ to locate the vehicles.

• ­Wait for SecuroServ to locate the final target.

• ­Deliver the Deluxo to the drop off.

• ­Help deliver the Deluxo to the drop off.

• ­The Data Breaches (if all setups and preps are completed)

• ­Trade price for the Deluxo on Warstock Cache & Carry

"Use the Deluxos to get close to multiple target vehicles and hack them to recover the data packages."
— Brief.

The crew have to move to a parking lot in La Mesa, where the Deluxos are ready for use. Lester informs that there are four separated caches of data, each remotely operated by a central hub and they need to exploit their weakness by staying close with the car and using the SecuroServ Hacking app from the phone, then destroying the vehicle when the hack is completed.

The first objective is a group of four black Stockades roaming around the city, each one with an enemy on the back for defense.

The second objective is a group of four black Police Predators navigating around the sea and waterways of the map, again with a passenger on the cabin for defense. The crew have to use hover mode to reach the target.

The third and final objective is a black/white Cargo Plane in Los Santos International Airport, which is ready to take off. The crew have to use the hover mode to fly close to the plane to continue with the hack. On the middle of the process, three Valkyrie MOD.0's will arrive to take out the crew's vehicles, so they need to destroy them to defend the player who is hacking the plane.

Once the plane is hacked, Avon informs that the data is fully downloaded, while Lester orders the crew to destroy the plane and deliver the Deluxos back to the drop-off point, a parking building on Little Seoul. 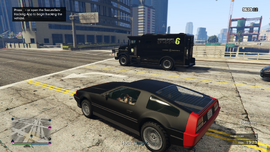 A black Stockade as one of the targets.
Add a photo to this gallery

Retrieved from "https://gta.fandom.com/wiki/Setup:_Signal_Intercepts?oldid=1061617"
Community content is available under CC-BY-SA unless otherwise noted.