The ability to be able to start Contracts.

In-game time
“It just so happens I got something you can help me with. One time took my pink slip, they got my car... The same one you saw us in at the meet? Get it out the impound lot and bring it back here.”
— Sessnta's briefing before starting the mission.

Impounded Car is a setup mission featured in Grand Theft Auto Online as part of the Los Santos Tuners update. It is a Free Mode mission that can be conducted in any session type by CEOs, VIPs and MC Club presidents.

Sessanta doesn't think the player looks like much of a driver. To ensure they are worthy of dealing with the jobs she and Kenny have planned, she gives the player a test.

Her yellow Tailgater S, that she was last seen driving in the LS Car Meet opening cuitscene, has been impounded by the LSPD.

The player must travel to one of four city police stations and steal the car from the police guarding it. On the way, Kenny calls and explains that after the Protagonist helped him recover the Diamond's Itali RSX, he got used to the way things are in Los Santos and came to see the opportunites available to an outsider of his reputation. His DJ background gives him a legit, trusted rep with the city's gangs, and that's why he needs the player to help keep that reputation clean: as long as he is seen as trustworthy, the gangs will keep sending him work, and that means more money for him, the player, and Sessanta. After recovering the Tailgater S, which Sessanta is keeping an eye on its whereabouts through the movement of its onboard tracker, the player has to lose the cops (via a three star wanted level) and then return the car to their Auto Shop.

Upon returning, Sessanta and Kenny challenge the player to sniff coke to make sure whether or not they are actually an undercover cop, as they're aware that police officers cannot do so under any circumstances. The player doesn't hesitate, but is stopped at the last moment by Kenny, as Sessanta laughs and claims that it's 'just sweetener'.

With that out of the way, Kenny reiterates that when he first arrived in Los Santos, all he saw was people chasing each other with rockets and not taking advantage of a host of money-making opportunites that Kenny could see. He and Sessanta came up with plans to rob banks, drug dealers, and even the government, and the player will be free to pick the jobs they do. The other two figure that with the right plan, car, and driver, anything is possible. Kenny will be scouting for new scores as he goes about his business, while Sessanta works on cars with the player in their Auto Shop.

Players can access all features of their Auto Shops including the Contracts on the Job Board. 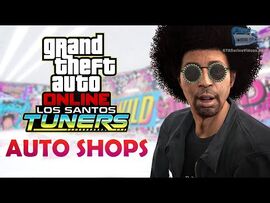