In-game time
“Infiltrate the FIB Headquarters and retrieve any data that could lead to Dr. Dre's stolen phone.”
— Brief

Setup: Data Recovery is a Data Leak investigation setup mission featured in Grand Theft Auto Online as part of the The Contract update.

Return to the Agency

to meet with Franklin and Imani.
“Hey, partner... shit, good work out there. We in business now. Look, head back to the office when you get a sec, a'ight? I want you to meet the team, so we can plan this thing out.
Man, if the old me could see how I operate now, I don't know what he'd think. We about to do some high-tech problem solving. When you learn that shit, you can't unlearn it, right? Shit, guess I got to thank my old crew for that.
”
— Franklin's call after On Course

On entering the Agency, the Protagonist heads straight to the operations level to meet up with Franklin Clinton and Imani at her work station. Franklin beckons them over, saying that Dr. Dre had sent the number to the stolen phone and that Imani is tracking it now, but Imani corrects him that she already did that 20 minutes ago and what he's looking at is a browser game she's playing. After running into a Game Over, she explains that the phone is firewalled with several extra security measures to prevent remote access, which is a good thing until the owner loses it. The only option left is extreme: break into FIB Headquarters in Downtown Los Santos, locate the server stacks for their mass surveillance program, insert a thumb drive to give her remote access (and don't get caught). She could then get a full data signature of the phone and track any copies that got made. Franklin scoffs that he was thinking it was going to be hard, and he assures Imani that he made the FIB "my bitch" a long time ago. He and the player are certain they can get it done.

It's right then that Lamar Davis walks in, wondering why they are doing hacking and backroom deals without him. Lamar has actually dropped by to retrieve the cannabis sample that he'd left with Franklin, as LD Organics is doing well and he needs it back in his stock. Franklin says it's on top of his office desk, but Lamar already checked, and Franklin is annoyed at the implication that he went through his desk without permission. Lamar replies that he didn't know that "us lowly employees" weren't allowed in Franklin's office, but Franklin irritatedly reminds him that he's not part of the staff.

Imani then notices that Chop has shown up by the door and acting strangely, weaving back and forth while drooling until falling onto his back. Concerned, Lamar and Franklin check up on him and Lamar realizes he's higher than a kite, having eaten his cannabis sample. Franklin scolds the dog for eating weed (again). When Imani draws attention back to the client's phone situation, Lamar immediately walks over before Franklin can stop him and sees Dre's picture on one of the monitors, to his amazement and Franklin's frustration. Lamar goes off on how legendary Dre is and if there is anything undiscovered on his phone like his "mythical lost album", gleefully hopes Franklin will play it for him first, but Franklin points out that even if there's anything on the phone, it's going straight back to Dre. Lamar expresses his disappointment in Franklin and claims he owes Lamar for the devoured weed but is just told to sue Chop for it.

Franklin asks the player and Imani to get started on the Dre contract and he'll get in touch later, while he has Lamar help him carry Chop downstairs. As they each grab a foreleg and a hindleg, Lamar wonders if Franklin could get a good word in for him with Dr. Dre to endorse LD Organics. Imani asks the player to log in down in their office.

in your office downstairs to begin the investigation into Dr. Dre's stolen phone. Log in and select VIP Contract to get started.

“Hey boss... it's Imani. So you know your way around this app from the contracts you and the other boss were looking at, right? We're gonna run this Dre phone op from here too. First step, you gotta break into the FIB's server stacks, throw a thumb drive in the right hole, then either you escape with everything we need, or they catch you and throw you in supermax for a couple hundred years. Your partner says it's pretty simple. Just hit the button right there on screen and we'll get moving.
In the meantime, one of Dre's people are gonna bring round the car the phone got stolen from. We can do some forensics on it, see if we can get a lead that way. The more angles we try, the greater chances we got of succeeding.”
— Imani after logging in
Select VIP Contract, then start Setup: Data Recovery when you are ready to begin the investigation into Dr. Dre's stolen phone.

The player, given Infiltration Gear and Sticky Bombs, flies in the company helicopter to the roof of the FIB headquarters and breaks in through the skylight. Meanwhile, Imani hacks the building's fire alarm and triggers a fire drill in order to clear the floor. The player then has to locate the Communications Room. Imani discovers the security protocol was updated so she can't hack the door like she planned until the fire drill ends. Franklin has them use the Sticky Bombs he packed to blow off the door instead, which alerts FIB security to their presence and a four-star wanted rating. Quickly, the player inserts a USB into the computer in the room to install Imani's software, then fights off the waves of security personnel entering from the far west door, and from the room next door to the Communications Room while she locates the data.

She discovers from the data patterns that the phone was likely cloned a few times, and has the player steal a hard drive from the server rack containing the data, so she can examine it to track down the phone and all the copies. The player fights off one wave of security, and gets back outside, below the roof. They need to quickly take down two FIB helicopters then run for the ladder on the far side leading back up to the roof and take off, before LSPD arrives by helicopter and rappels officers down to secure the roof. Once the police have been lost, the player returns the hard drive to their agency, via the front door, and drops it off with Franklin in his office.

“Alright. I'm jumping on that data you pulled. Won't be long til we know where the phone and the copies are at.”
— Imani's text

Return to the Agency

and log back into the network in your office to continue the investigation.
3-way conference call started.

The next time the player is not at the Agency, Imani conference calls Franklin and the Protagonist with her finished analysis of the hard drive's data: there are three data signatures of Dre's phone in three different places. The problem is they all went dark a while ago, and all she has is their last known locations. With Franklin determined to recover every last one, she sent the details to the player's computer to go over with them when they return. 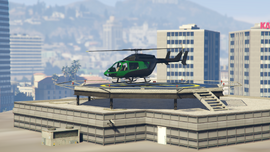 Leaving the Agency by SuperVolito Carbon. 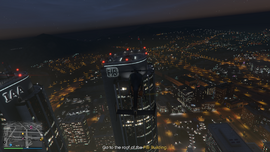 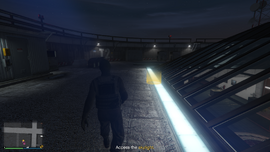 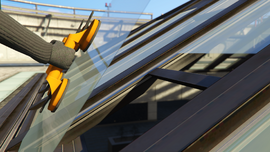 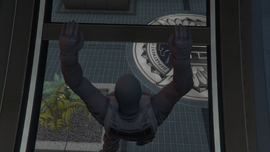 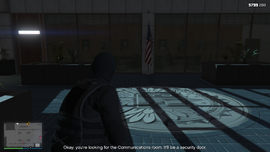 Look for the Communications Room. 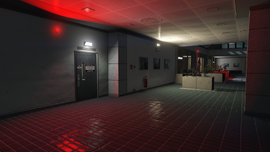 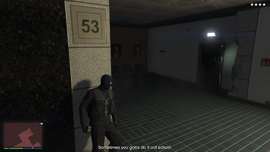 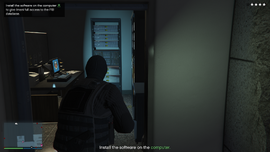 Install Imani's software on the computer. 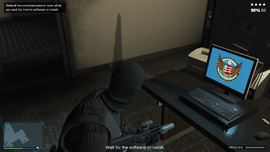 Wait for it to install. 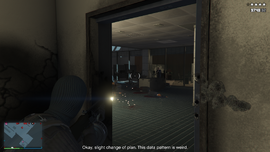 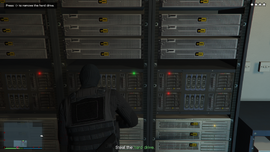 Steal a hard drive from the server rack. 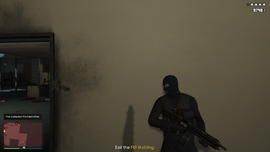 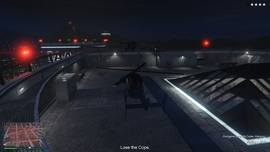 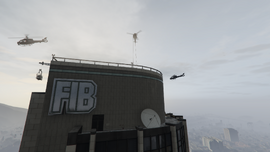 2 FIB Froggers and a Police Maverick. 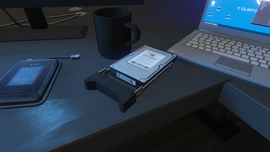 The stolen hard drive on Imani's desk in the player's Agency after completing the mission.