• ­Go to the Sandy Shores Airfield.

• ­Wait for your team to get into the Volatol.

• ­Deliver the Volatol to the Sandy Shores Airfield.

"Use a Volatol jet to destroy multiple SAM turrets around Mount Chiliad."
— Brief.

The mission starts by directing the crew to go to the Sandy Shores Airfield. During the trip, Phoenicia Rackman informs of the situation about Avon Hertz preparing for war and that the government wants to stop it before it get too heavy. Bogdan then briefs to the crew that the Russian Intelligence are aware of SAM sites around Mount Chiliad. Rackman also informs that they secured a Volatol jet to destroy these emplacements.

Once the crew members reach to the destination and aboard the plane, Lester Crest informs that the plane has full payload capacity with carpet bombs, two remote turrets, stealth tech and ghost frequency, so they won't have to worry about the SAM sites directly targeting the plane, but may have to lookout for anything airborne.

The crew will then go to Mount Chiliad and have to destroy the turrets. There are 12 turrets and because of the Volatol's sharp turns, the pilot will have to rotate around the mountain several times to destroy them, all while dodging oncoming Buzzard Attack Choppers. After destroying half of the sites, Lester informs that P-996 LAZER jets are sent to destroy the Volatol, but the pilot can either outrun these or approach them and let the gunners attack with the remote turrets.

After all turrets are destroyed, the pilot will need to return the Volatol back to Sandy Shores Airfield. The mission ends with a short cutscene, leading to The Doomsday Scenario. 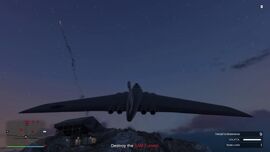 The Volatol during the setup mission.

Retrieved from "https://gta.fandom.com/wiki/Setup:_Air_Defenses?oldid=1170038"
Community content is available under CC-BY-SA unless otherwise noted.