GTA Wiki
Register
Don't have an account?
Sign In
Advertisement
in: Pages with non-numeric formatnum arguments, Vehicles, Vehicles in The Ballad of Gay Tony,
and 8 more
English

TBOGT
Not to be confused with the Surano, a sports car in Grand Theft Auto V with a similar name.
“Fun fact: what's the fastest growing market in the American auto industry? That's right! Compact SUVs! And do you know why? That's right! Neither do we! And is that a good enough reason to buy one? That's right! It had better be!”
— Southern San Andreas Super Autos description.

The hood design, grill, greenhouse, and sides are similar to a Mercedes-Benz GLE, (formerly known as ML-Class) while Mercedes-Benz GLK/GLC influences are seen on the crease on the sides and the rear. The bi-xenon headlights are much like that of the 2002-2006 Volkswagen Touareg, but with added LED turning signals.

The Serrano is depicted as a small SUV with a similar size as the Übermacht Rebla. The bumper features a small bottom lip/extender and a set of meshed intakes, where the central one spans about half the car's width and bears a black horizontal divider on the middle, while the outer ones house non-functional fog lamps. On the upper area, the central section features a silver/chrome grille of about the same width as the central intake and bears the manufacturer logo on the centre, while the outer sections have large headlamp housings with black trim around, each one having dual circular main lamps on the upper side and wide turn signals on the lower side. The bonnet has a slight elevation starting from the grille and going towards either A-pillar of the cabin, fitted with small intakes near the windscreen.

The sides of the car are predominated by the bulky wheel arches, the small exit vents on the front fenders and the small side steps at the bottom. There are impressed areas passing through the doors, with the upper lines being angled upwards and almost reaching the top of the rear tail lamps. The cabin area makes use of black trim around the windows and on the pillars, only leaving coloured portions on the A-pillars and the upper borders of the roof area, as well as coloured mirror wings with black supports. The roof panel has two black long strips on the sides that separate it from the rest of the car.

The rear of the SUV is somewhat curved in appearance and features a large compartment door, which has a small top lip, a dedicated central section for the license plate and the corresponding badges above and beside it. The outer sections have large tail lamps with a black detail around them, each one consisting of large main/brake lamps, lower reverse lamps and upper, smaller turn signals. The bumper is relatively large and also has a small bottom lip/extender, while two exhaust tubes can be seen below it.

The interior is similar to Habanero's, but the steering wheel bears a Benefactor logo instead of Albany's or Emperor's.

The Serrano returns in Grand Theft Auto V and Grand Theft Auto Online and is mostly unchanged from its first appearance. In the enhanced version, the car uses the same "Feroci" interior as vehicles like the Habanero and the Ingot.

Colour distribution in the same as in TBOGT, and retains the same wheel design as before, being similar to the "Bippu" SUV wheels seen in Los Santos Customs.

Although the Serrano and the Huntley Sport compete for the fastest SUV, the Serrano is considered to be better because it has a higher top speed, and is easier to use on off-road courses. In terms of handling, the Serrano's cornering performance is average due to its excess weight, and the Serrano tends to suffer from understeer around tight bends. It is, however, easy to drive when used properly.

The Serrano is stated to be fitted with a supercharged V12 engine similar to the Schafter. However, it is actually modeled as a turbocharged twin-cam inline-4 engine and coupled to a 5-speed gearbox, which is laid in a front engine, all wheel drive layout (50% front, 50% rear torque distribution). The engine sound appears to be a higher-revving variation of the one used in cars like the Rebla, the Habanero and the Landstalker, unique to this vehicle.

The Serrano produces a moderate amount of torque, and achieves an just above average top speed. Its four-wheel drive setup allows the car to operate exceptionally well off-road.

Once again, the side badges states that the Serrano features a V12 engine. However, the engine is actually modeled as a turbocharged twin-cam Inline-4 engine with a 6-speed gearbox. It is laid in a front engine, all wheel drive layout (60% front, 40% rear torque distribution). The car has a mid-revving engine sound shared with the Blista.

The Serrano's Inline-4 engine model in The Ballad of Gay Tony.

The Serrano on the updated Rockstar Games Social Club.

Picture of a modified Serrano on the Touchdown Car Rentals sign in GTA V. 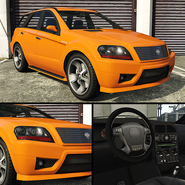 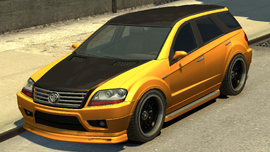 A modified Serrano in The Ballad of Gay Tony (Rear quarter view).