The Humane Labs Raid
“Creep into the Lost camp at night, take out their guards on the quiet, and bring their vans to Ron. They should be loaded with meds.”
— Brief.

Bikers is the third heist setup for the Series A in Grand Theft Auto Online.

For this operation, the crew will be instructed to head to head to trailer in Sandy Shores. Trevor informs the crew that they will be attacking The Lost MC and stealing their vans filled with cocaine. He says that he has left some silenced weapons for them in his garage should the team require them.

After arriving at the trailer and obtaining the weapons if needed, the crew commandeers a Dinghy nearby and travel to Stab City. While approaching, Trevor explains that the crew will have to use stealth to take out The Lost members before moving the vans with the cocaine. If any of The Lost members spot any of the players or spots another member being killed, the mission will fail.

Once all members have been killed, the crew will pick up the two vans and deliver them to the warehouse under Los Santos Freeway in East Vinewood. Along the way, members of The Lost will attack and chase them down in both bikes and Lost Slamvans. Once both vans have been delivered to Ron Jakowski, the mission is complete. 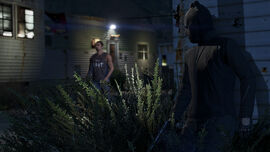 A member of the crew ready to eliminate a Lost MC member.