Yes
“When you're doing 90 in the fast lane, this is the car right on your ass flashing its high beams. If you're quite rich, and really an asshole, and you want everyone to know it, you can't do better.”
— Southern San Andreas Super Autos description.

The Sentinel XS is a modified version of the regular Sentinel, being suggestively based on the BMW L7 and BMW M635CSi, the high-performance luxury version of the BMW E23 7 Series and E24 6 Series, respectively.

The Sentinel XS in Grand Theft Auto V and Grand Theft Auto Online is based on the Sentinel, but features a fixed roof in place of the folding hard top, and the lower portions of the front and sides, the rear-view mirrors and the roof panel were finished in CFRP.

The car is prominently painted in a primary colour for the body and the interior stitching. The car also uses a different set of wheels, being identical to the "Cosmo" wheels available in Los Santos Customs.

In the enhanced version, all of the carbon-fibre components are replaced by secondary-coloured parts.

The Sentinel XS model was later updated in The Contract update in December 2021. Although the model didn't receive any visual changes in the design, the model was updated to fix a graphical glitch which caused the passenger side window to slightly glow as an emissive light. The model also received livery mapping with a complete template, although the vehicle did not receive any livery customisation at first; however, it receives new liveries when converted to the Hao's Special Works variant, exclusive to the Expanded & Enhanced edition.

The Sentinel XS in Grand Theft Auto: Vice City possesses superior acceleration, braking, and handling abilities compared with the normal Sentinel. Like the normal Sentinel, It has rear wheel drive, but it is also far more stable in turns than the normal Sentinel and other RWD cars, and is far less prone to oversteer (though oversteer will still occur if the Sentinel XS is drifted too heavily via handbrake). This stability may be attributed to the spoiler-induced downforce that keeps its rear wheels from losing traction, which in turn may be the reason behind the slight-to-moderate understeer experienced in the Sentinel XS at corners. This understeer can be corrected by tapping the brakes to induce the front end to rotate better. The car's powerful engine is coupled up to a 5-speed gearbox, evidently by the gear-changes identified by sound.

Overall, its combination of speed and good stability make the Sentinel XS a fine vehicle to go racing with.

Performance-wise, the Sentinel XS is identical to the regular model, being a good performing vehicle with good top speed and acceleration. While it is generally good at withstanding several collisions, its body is rather weak, and can be easily deformed at high speeds, increasing the chances of jamming the front wheels.

Again, the Sentinel is powered by a twin-cam, four-cylinder engine fitted with a turbocharger, this time coupled to a 6-speed gearbox in a front-engine, rear-wheel-drive layout. Its engine sound is the same as the regular Sentinel.

The Sentinel in the original versions of the game, showing the original carbon-fibre parts. (Rear quarter view) 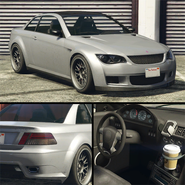 The Sentinel XS on the updated Rockstar Games Social Club.

A unique colored variant of the Sentinel XS spawns in the mission Unknowing the Truth. It appears in Epsilon colors, but unlike other cars, does not appear with a Kifflom license plate.[1] 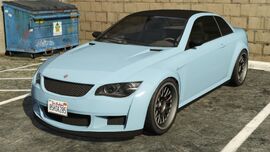