Standard White - 100%
“There was a time when a road-legal coupe could moonlight as a performance rally car and no one batted an eye. Consumers didn't need the reassurance of a touch-screen interface and integrated GPS. People could get behind a no-frills, lightweight bucket of speed, and their relatives wouldn't sue the manufacturer when it burst into flames. Those were the days of the Sentinel Classic - and now they're back.”
— Southern San Andreas Super Autos description.

The Übermacht Sentinel Classic is a rally coupe featured in Grand Theft Auto Online as part of the The Doomsday Heist update, released on December 19th, 2017, during the Festive Surprise 2017 event.

The Sentinel Classic appears to be based primarily on the BMW E30 M3. The front fascia is inspired by the Mk II Jetta GLI, with the headlamps taken from the Mk I Jetta.

The design of the car is reminiscent of the Grand Theft Auto III and Grand Theft Auto: Vice City renditions of the Sentinel, although it is designed as a 2-door coupé rather than a 4-door sedan. The front of the car is predominated by the front bumper, which features thin intakes on the centre, the rectangular fog lamps on the outer sides and the lip/splitter at the bottom. The upper area features plastic trim around the grille and the headlamps, along with the classic Übermacht logo on the bonnet and the Sentinel Tuning Division badge on the grille. The sides feature slightly wider fenders and skirts compared to the rest of the body, as well as sectioned ridges on the fenders and the doors. The cabin features plastic trim around the windows and body-coloured mirror wings. The rear end features a plastic panel that houses the rectangular tail lamps and the license plate, while the boot features a small lip, the classic Übermacht logo on the centre and the "UMSENTINEL" badge below the passenger-side tail lamp. The rear bumper is relatively bulky and has two mouldings for the exhaust tubes. The vehicle has a unique 1980s style dashboard model and interior textures named after the vehicle itself, and has its own steering wheel with a ‘Turbo’ badging onto the horn cap.

The primary colour of the car is applied on the bodywork, while the secondary colour is applied on the grille and the ridges found on the bumper and the sides. A trim colour is also available for the dashboard, doors, seats, and also the pads on the roll cage (can be seen when "Padded Dash Dodger Cage" or "Padded Full Roll Cage" applies on the vehicle). Its wheels are shared with the Cheetah Classic.

Despite the Sentinel's statistics, it performs better than advertised. Acceleration is unbelievably quick, despite the stats, which are telling a different story. Brakes are quite strong, but lose their effectiveness at speed. The Sentinel shares some handling traits with the Futo, such as its light back end that makes it prone to oversteer. Fitting the Sentinel Classic with off-road tires gives it performance benefits when driving around dirt road, making it a potential vehicle for off-road races.

Like the Futo, the Sentinel Classic is powered by an Inline-4 engine with throttle bodies, which is coupled to a 5-speed gearbox and powering the rear wheels. The engine sound seems to be a lower-pitched variation of the one used in the Stinger GT and the Issi Classic. True to the badging and despite there being no turbocharger on the engine model, the vehicle’s stock engine can be clearly heard utilising a turbocharger, evidenced by the blow-off valve sound. It should also be noted that this sound has a much higher pitch than other vehicle’s equipped with turbo, and is unique to this vehicle.

Poster as seen during the Festive Surprise 2017 Event Week. 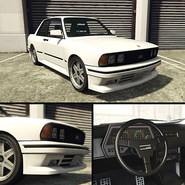 The Sentinel Classic on the updated Rockstar Games Social Club. 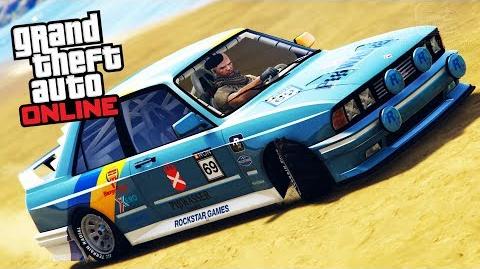 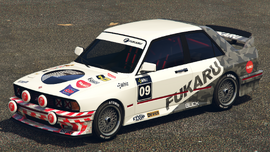 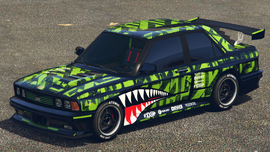