For the vehicle in the beta version of Grand Theft Auto III known as "Sentinal", see Kuruma.
“When you're doing 90 in the fast lane, this is the car right on your ass flashing its high beams. If you're quite rich, and really an asshole, and you want everyone to know it, you can't do better.”
— Southern San Andreas Super Autos description.

The Sentinel is a recurring series of executive cars featured in both the 3D Universe and HD Universe, with the exception of Grand Theft Auto: Chinatown Wars. It is manufactured by Übermacht in the HD Universe.

Throughout the 3D Universe, the Sentinel is depicted as a mid-size luxury 4-door sedan based on various BMW sedans, with differences in design cues reflecting the game's respective time periods.

At one point of GTA III's development, the Sentinel was named the "Beamer" (Beamer, or Beemer, is a common slang term given to BMW cars, especially the modified ones). A car of this name was previously featured in Grand Theft Auto 2, and was also based on a BMW. Meanwhile, a "Sentinal" was also in the process of development, appearing as a modern mid-size car that would go on to become the Kuruma. Both beta cars can be found in the Capital Autos website.

The Übermacht Sentinel in Grand Theft Auto IV is redesigned into a compact two-door sports coupe, based on the BMW E46 M3 in chassis design, as well as the entire front, though the grille is one piece. The rear, however, seem to be inspired by the older E36 and E39. Also, it appears to have smaller body, making it also similar to the BMW 1 Series coupé.

The Sentinel assumes a more rounded design, with a detailed bumper, flat grille and single headlamps. Two small intakes can be seen on either side of the bonnet. The sides have long vertical vents on the front fenders, angled side skirts and a detail running towards the rear. Also visible are miniscule STD badges in front of the doors, near the sideskirts and front wheel wells. The rear end features a standard set of tail lamps on either, and a detailed boot, featuring chrome letterings displaying the car's manufacturer and name on the lower sides, a chrome strip above the license plate, and the manufacturer's emblem above.

The Sentinel spawns in a variety of primary colours on the body and usually with silver or black secondary painted alloy rims, except for one set with gold rims. The vehicle uses 12-spoke rims with a chrome lip around, as well as low-profile tyres.

It is equipped with a GPS system with a female voice, but only if the player leaves the "selected cars" (default) option in the audio menu.

The Sentinel is redesigned once again in Grand Theft Auto V and Grand Theft Auto Online into a hard-top convertible, inspired by the BMW E93 convertible, although the headlights appear more like those found on the Subaru Impreza (second facelift), and the grille is a single unit as opposed to the trademark "kidney" grille found on BMW models. This gives the car little style cues from the Lexus ISF USE20. The rear of the car is based mainly on the Saab 9-3, especially with the curvature of the front grille components, headlight configuration and bumper alignment. Unlike the 3-series that this model is based on, the exhaust tips sit just outside the outer edges of this area, and are oval as opposed to twin-circles. The wheels featured on this model bear a striking resemblance to Volk Racing GT30 or RE30 wheels.

The overall design of the car remains largely similar to its previous iteration, but the front end is largely dominated by the front intakes, with the central one adopting a small curvature on the lower side. The edges of the car have chrome curved housings with dual circular lamps. The greenhouse area remains similar, although the front seats are moved slightly backwards and the doors are a bit longer, resulting in a vehicle with ample room. The rear end received numerous changes in terms of details, with the tail lamps being larger, the boot having a lip bove the license plate and the exhaust located within the rear end. A black portion can be seen below, housing two square reverse lamps.

The car is prominently painted in a primary colour, with the lower portions of the front and the sides, the rear-view mirrors and the retractable roof painted in a secondary colour. The stitches found in the interior matches with the primary colour. The rim design is shared with the Feltzer and the Fusilade, being identical to the "Organic Type D" sport wheels available in Los Santos Customs.

With a sturdy engine in all its appearances, the Sentinel has a decent top speed and acceleration despite its heavy weight. The car handles well, although it suffers from body roll in Grand Theft Auto: Vice City Stories. It comes with good drifting properties, although its RWD layout sometimes leads to oversteer and tailspins; these problems are more apparent in the Grand Theft Auto: San Andreas rendition, due to its lighter weight distribution and softer suspension. In GTA San Andreas, the Sentinel is the second fastest four-door car in the game. Also, the Sentinel in all games are known to be durable due to its luxury build and heavy weight, which can withstand large amounts of damage before it is destroyed, making it a suitable choice for street racing, pursuits, getaways and as a cover in shootouts.

As a sport compact executive coupe, the Sentinel reaches a superb top speed, but not far from the fastest vehicles in the game. It has above-average acceleration, and reaches its top speed fairly quickly as well. The Sentinel's suspension is rather soft, and it tends to roll when going around tight bends at high speed; the rear of the car also tends to bounce about when traveling on uneven roads. Its handling is above average, but at high speeds it loses a lot of grip and easily spins out of control due to the lack of weight in the rear. But if controlled right, its speed and grip can be combined to produce almost-professional like drifts that can be used to slide into sharp turns and back alleyways to evade the police without difficulty. Nonetheless, it is arguably the best choice in the modern category in multiplayer racing.

The Sentinel is powered by a twin-cam, four-cylinder engine fitted with a turbocharger, coupled to a 5-speed gearbox in a front-engine, rear-wheel-drive layout. Its engine sound is similar to vehicles like the Sultan and the Chavos.

The Sentinel received massive improvements, such as increases in top speed and acceleration, braking distance and gear shifting. Crash deformation is acceptable, and can take multiple crashes to even deform the front end. The engine is strangely exposed to gun-fire, taking the most damage from gun-fire, which is strange to say as it is completely covered. Crash deformation at higher speeds is high (quarter panels of the car may look to be "glitched" into the wheel wells if hit hard enough), and it is not hard with this car to make the wheels jam in crashes, but the car can withstand a surprising amount of frontal impacts without failing. The Sentinel is a decent car to use in online races and is even better in Freemode sessions, thanks to its very smooth and precise driving which compensates for its (relatively) low acceleration compared to other cars.

Again, the Sentinel is powered by a twin-cam, four-cylinder engine fitted with a turbocharger, this time coupled to a 6-speed gearbox in a front-engine, rear-wheel-drive layout. Its engine sound is similar to vehicles like the Tailgater and the FQ 2.

Very early beta of the Sentinel (with XS accessories).

The beta Sentinel in GTA III as the "Beamer", as depicted in the Capital Autos website.

A gold Sentinel in GTA IV.

Michael drives a blue Sentinel in the first trailer.

Amanda's Sentinel with the KRYST4L license plate, as seen in the "Michael" trailer.

The rear of Amanda's Sentinel in the "Michael" trailer.

A Sentinel magazine advert seen on a pile of magazines in Isiah Friedlander's Office. 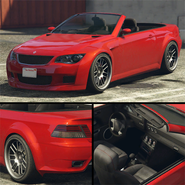 The Sentinel on the Rockstar Games Social Club.

The Sentinel on the updated Rockstar Games Social Club. 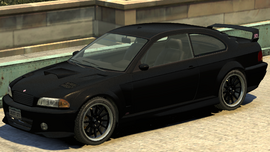 The Sentinel is prominently featured multiple times in GTA: Liberty City Stories, all of which are depicted with a dark gray/black body color:

The Sentinel is only featured in two of GTA V's missions.

Sentinels are generally found throughout the business districts of all the cities; some can be seen driving in the suburbs and wealthy parts of town as well.