Standard White - 100%
“When a responsible adult buys a car, it's a question of making sensible compromises. Your heart wants a feral, mountain-chewing 4x4 with bullbars and more torque than a Panzer division. Your spouse wants a family SUV with childproof locks, powerful aircon, and an airbag so big it'll break your jaw if a fly hits the bumper. But look around you. Do we live in the age of responsible adults or sensible compromises? Enter the Seminole Frontier. Be safe, look reckless, have it all.”
— Southern San Andreas Super Autos description.

The Canis Seminole Frontier is an SUV featured in Grand Theft Auto Online as part of the Los Santos Summer Special update.

As an older model of the Seminole, the Seminole Frontier is based on the second generation Jeep Cherokee (XJ), with the front lights derived from a 1984-1990 Jeep Wagoneer (XJ).

The vehicle retains the traditional four-door layout from its modern counterpart, but inherits an older, boxier styling comparable to the Hellion. The front of the car uses a traditional dual-bar bumper with chrome finish, plastic edges and black vertical guards, which derives from the Hellion. The upper area is mostly finished in black and features numerous separations across it, with a wider horizontal one splitting the front in half and bearing a circular detail on the center with the manufacturer badge on it. The sections beside the grille are occupied by dual square lamps in a vertival positioning, while the outermost edges house amber vertical lights. The hood is relatively simple and has two body lines that are almost in line with the side borders of the grille, as well as a wide intake between the engine compartment and the base of the windshield.

The sides of the vehicle feature flared arches and slightly wider sections above the arches and on the lower portions, with the frontal ones being of the same height as the headlights, together with ridged lines going across the sides, towards the rear tail lights. There are silver "FRONTIER" badges embossed on the wide portions of the front doors, as well as circular logos on the front fenders, between the wide portions and the front doors. The cabin area is relatively simple and features black trim around the windows and on the roof line, as well as black square mirror shells and black door handles.

The rear of the car is mostly occupied by the large rear compartment door, with the corresponding rear window and a single wiper pivoting from the center. There is a plastic strip on the center with the silver "CANIS" lettering above, two ridged lines beside it and the section with the license plate below, while the lower corners of the compartment bear silver lettering disolaying the vehicle's name on the driver side and "4x4" on the passenger side. The lower edges of the vehicle is occupied by rectangular tail lights, each one consisting of an upper turn signal, middle reverse lights and lower main/brake lights. The rear bumper is identical to the front one, being traditional dual-bar bumper with chrome finish, plastic edges and black vertical guards. The underside denotes its suspension setup typical of many off-road vehicles, having articulated bars apparently running from the center of the vehocle towards each sideof the axles, along with a chrome steering rack and pinion in front of the front axle. The interior is shared with its modern counterpart, being similar to vehicles like the Cavalcade and the Granger.

The primary color of the car is applied on the body, while the secondary color is applied on the lower sides. The vehicle shares the same wheel design as the Hellion, being a derivative of the "Mudslinger" off-road wheels available in Los Santos Customs, with the updated tread patterns in the tires. The rims can also support a dedicated color, although examples generated in Content Creator may have one.

The Seminole Frontier can be fitted with functional extra lamps on the front bullbar and roof racks. 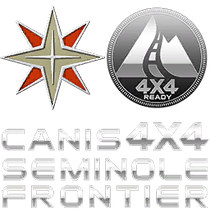 The Seminole Frontier, while overall average, has good handling and a good amount of durability. Its acceleration and top speed are average, and it may not keep up with other, faster SUVs in races. It makes up for this with its excellent off-roading capability and it does not tip over easily thanks to its weight.

The vehicle is powered by a straight-6 engine sporting throttle bodies, coupled to a 4-speed gearbox in a front wheel, all wheel drive layout. Its engine sound is shared with vehicles like the XLS, the Stanier and the Taxi. 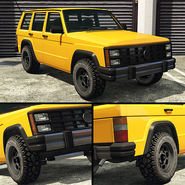 The Seminole Frontier in the cinematic preview on Rockstar Games Social Club.

Seminole Frontier badge from the advert.