Yes
“A metal cage soldered to a wheel chassis isn't everybody's first choice of car, which is why Canis decided to take their signature off-road car model, encase it in some flimsy bodywork and re-market it as a "Family SUV."”
— Southern San Andreas Super Autos description.

This SUV's design appears to be inspired by that of the second generation Jeep Grand Cherokee, which is shown in the hood, rims, and main body line. The front bumper looks to be both from the pre and post facelift models, while having a lower brush guard from a 2007-2013 Volvo XC90 and Pontiac Torrent. The wheel arches, greenhouse area, and side trim are from the third generation Jeep Grand Cherokee, while the front fascia seems to be inspired by the third generation Nissan Pathfinder/second generation Nissan Frontier.

The Seminole is distinguished by its apparent sturdy profile, where the front end is largely dominated by a bulky bumper with a brush guard whose outer frame is finished in chrome, along with black sections beside the brush guard, housing unusable circular lamps. The upper area features a meshed grille surrounded by chrome separations, with the middle one being thinner than the two central ones. Beside the grille, there are dual headlights and turning signals, which are also surrounded in chrome. The brand's name is seen embossed on the hood, just above the grille, while smooth body lines can be seen arou d the center, reaching towards the base of the windshield.

The sides of the car denote its prominently large body, with bulky arches and lower sides and black plastic strips, as well as "4x4 OFFROAD" badging embossed on the front doors, just over the aforementioned strip. On the greenhouse area, the vehicle prominently features black finish around the windows, around the mirror wings and on the pillars, while the A-pillars, roof line and front portions of the mirror wings are painted. The roof panel is separated from the rest of the car by two black lines.

The rear of the car is very simple, featuring the corresponding rear compartment door, the manufacturer emblem on the center, a black strip displaying the vehicle's name on the passenger side above the license plate, and the rear compartment handle on the driver side. The outer edges of the car house rectangular tail lights with a black surrounding, each one consisting of the upper main light, the middle brake light and the lower turn signals. The bumper is large and flat, with small square-shaped exhaust pipes below. The vehicle shares the same interior as vehicles like the Cavalcade and the Granger, and shares the same yellow dial set in the enhanced version.

The vehicle may spawn with a single color or a two-tone color, where the secondary one is applied on the lower side of the front bumper, the portion below the side black strips, and the rear bumper. The vehicle shares the same rims as the Primo, being the same rims loosely resembling the "Outsider" tuner wheels available in Los Santos Customs. While the rims are set to spawn with the default alloy color and is mostly finished in black and chrome, the wheel color gives a slight tint/shade of the selected color that is more visible on the center, which is only possible in examples generated in Content Creator.

The Seminole is an average SUV in every way, both in design and performance. The top speed is average for a vehicle of its class, but acceleration is mediocre, leading to the Seminole feeling sluggish and heavy during normal driving. Handling is a bit better, as the vehicle does not suffer from any oversteer or understeer, and it is very stable at high speeds. Like its real life counterpart, it does well off-road, thanks to its AWD drivetrain. The Seminole has a semi-stiff suspension which helps it stay level when cornering, but it has just enough travel to make the vehicle drive smoothly on uneven terrain.

The Seminole is powered by a small Inline-4 engine, but gives the car a boost in its acceleration. Its acceleration time is noticeably quicker than direct competitors like the Cavalcade or the Baller. The engine sound appears to be similar to vehicles like the Premier and the Primo, but with a rather smooth tone.

The Seminole on the updated Rockstar Games Social Club. 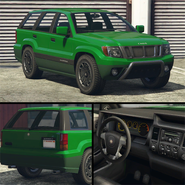 Originally, the car could not be stored in a garage. This was corrected in patch 1.10.